Screening a library of known drugs is beginning to turn up unexpected benefits.

A widely-available antihistamine called astemizole could help in the battle against malaria, according to a survey of more than 2 600 drugs in a pharmaceutical ’library’.

The Johns Hopkins Clinical Compound Library (JHCCL) is the largest readily accessible collection of approved drugs available for this kind of screening survey, said David Sullivan of the Johns Hopkins Bloomberg School of Public Health, Baltimore, Maryland, US, part of the project team.

Astemizole is proof that screening existing drugs for previously unknown activities could help speed up the expensive and time-consuming process of drug development, said Sullivan. He and his colleagues, including Curtis Chong and Jun Liu, have spent about four years collating the library, which cost roughly $500 000 (?275 000) and was largely funded by the Johns Hopkins Malaria Research Institute. 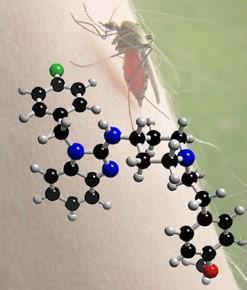 The antihistamine astemizole could help in fight against malaria

The JHCCL’s drug stocks are mostly stored in solution, and small portions must be transferred into trays of tiny containers for automated testing. ’But you could screen the whole library in a week, maybe less, depending on your assay,’ said Sullivan.

An initial screen of the drugs’ activities highlighted 189 existing drugs that could inhibit the growth of Plasmodium falciparum, one of the parasites that causes malaria. The team shortened the list by ignoring known antimalarials and cytotoxic drugs, and identified astemizole as a promising antimalarial drug after testing it in mice infected with malaria parasites. ’It was a surprise to find this activity,’ said Sullivan.

Astemizole was first marketed as an antihistamine in 1983 under the brand name Hismanal, and although it has been withdrawn in the US and Europe since alternative drugs with fewer side effects became available, it is still sold in generic form in more than 30 countries. It is readily available in Cambodia, Thailand and Vietnam, where malaria is endemic. Previous research has found that some antihistamines can boost the effects of antimalarial drugs when used in combination.

Astemizole attacks the parasite in a different way from the common antimalarial agent chloroquine, which means that it may be effective against resistant strains of malaria parasite, said Sullivan: ’It’s a proof of principle for the library screening process, but we’re optimistic that it might also be a viable combination drug.’

The general principle of trawling through approved drugs for additional benefits is a good idea, said Peter Winstanley, a malaria researcher at the University of Liverpool, UK. ’It means that a lot of the preliminary work has been done, and that does make it cheaper,’ he said. But he cautions that even if drugs are already approved, they still have to go through fresh clinical trials for additional diseases before they are used, a process that could take five years or more.

Sullivan admits that pharmaceutical companies are likely to have larger in-house libraries, but points out that those are not always easily accessed by academic researchers. ’And hospitals might have a larger number of drugs collected on their shelves, but that’s not suitable for rapid screening purposes,’ said Sullivan.

So far, the library has only been used by Sullivan’s team and a handful of other Johns Hopkins’ scientists. ’We’re not quite ready to have people call up and ask for the library,’ said Sullivan. But he expects that by the end of the summer they should be able to supply other scientists with small samples of all the library’s drugs, at the relatively low cost of a few thousand dollars.

Sullivan hopes that the JHCCL project will eventually collaborate with other partners to include every available drug ever used in medicine, which would swell the library to about 11 000 compounds.

A better understanding of the activity of malaria and an effective vaccine for the disease are both a step closer thanks to a team of chemists in Switzerland and the US.