UK chemists have synthesised organometallic compounds that enable zinc to participate in directed metalation of organic substrates. Zinc is relatively inert in most organometallic systems, but researchers have found that it becomes super-reactive if lithium or sodium are present in the molecule. 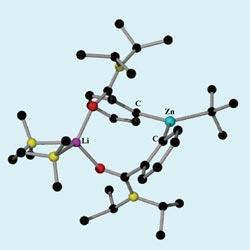 These new compounds also produce highly stable intermediate complexes with their substrates, the researchers report, allowing unprecedented structural information to be obtained about directed ortho-metalation reactions - which are fundamental in organic synthesis.

Robert Mulvey at the University of Strathclyde and colleagues created compounds containing either sodium or lithium together with zinc, and amide and alkyl groups. The compounds were reacted with an aromatic amide.

’There is a synergistic effect in that the zinc becomes reactive in the presence of the other metal,’ Mulvey told Chemistry World. ’In directed ortho-metalation reactions, an ortho  hydrogen is substituted by the metal ion which then reacts further with other reagents. However, ordinarily the intermediates are too short-lived to isolate.’
In the new system, two stable intermediates have been isolated and characterised. The first is a ’pre-metalation complex’, in which the two-metal compound is associated with the amide substrate but no hydrogen substitution has occurred. The second is a post-metalation complex, where the zinc ion has been directed to the ortho hydrogen position.

’This is the first structural report of a zincation reaction, and the stable complexes give us important new insights into these reactions and could enable chemists to design more efficient reagents,’ said Mulvey.
Simon Hadlington