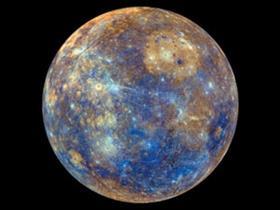 False colour image of Mercury. The planet is much richer in sulfur than Earth

Two outstanding, seemingly unconnected geology problems – the unexpected ratio of two neodymium isotopes in terrestrial rocks and the energy source for the dynamo that creates Earth’s magnetic field – could both be explained by one new idea. UK researchers have concluded that these phenomena could be explained by a body with a similar mass and chemical composition to the planet Mercury crashing into the primordial Earth.1 Under these conditions, they calculate, uranium would have been incorporated into the Earth’s core, where its radioactive decay would provide an energy source for the geodynamo.

The most abundant isotopes of neodymium in the solar system are neodymium-142 and neodymium-144. In 2005, Richard Carlson and Maud Boyet at the Carnegie Institute in Washington concluded from studying chondrites – meteorites thought to contain the primordial material from which the Earth formed – that the ratio of neodymium-142 to neodymium-144 in rocks on Earth is higher than in chondrites.2 Neodymium-142 is a radiogenic isotope formed from the a-decay of samarium-146, an isotope of samarium formed in the early solar system, which has a half-life of just 68 million years and is now extinct. An unexpected isotope ratio would mean that, at some point very early in Earth’s history, samarium must have been fractionated from neodymium before the samarium-146 decayed to neodymium-142.

Carlson and others have suggested that this fractionation could have occurred during partial melting to form an early crust, but this creates problems with other evidence from the geological record. Anke Wohlers and Bernard Wood of the University of Oxford suggest instead that, if a highly reduced, sulfur-rich body was incorporated into the Earth when it was still in a hot, molten state, neodymium, which forms sulfides more easily than samarium, would have been preferentially incorporated into the iron-rich material that went on to form the core.

They performed experiments showing that, as a mixture of silicates and iron sulfide is reduced, neodymium becomes more soluble in the iron sulfide than samarium. Uranium is also drawn into the molten iron sulfide, so the researchers reason that if neodymium was incorporated into the core, so was uranium. ‘We’re now working on partitioning of other elements into sulfur-rich metals,’ says Wood, ‘to see whether there are any other geochemical signatures to provide a better constraint on whether or not we’re right.’

Carlson says the research marks ‘an important step forward in thinking about the variety of ways planets can form’, but adds that the model has its own difficulties. ‘None of [the models] are perfect,’ he says. ‘We need to keep an open mind and explore the consequences of all of them.’