The Earth’s first continents may have formed in a geological setting similar to modern-day Iceland, according to the geochemical analysis of a newly discovered rock unit from Canada, which may have been part of an ancient proto-continent from which other continental crust developed.

With few rocks from the early Earth remaining today, we know relatively little about how the first continents were formed. One theory proposes that they may have originated in an ocean island-like setting, where magma upwelling from the mantle could have crystallised out to form continental crust. When looking for modern-day analogues for the setting of this continent-forming process, Iceland presents itself as a likely candidate, with its oceanic plateau being similar to continental crust in both its unusual thickness and composition – bearing high proportions of silica-rich rocks. The traditional drawback with this theory, however, has been the geochemical dissimilarity between rocks forming in modern-day Iceland and those we’ve found preserved from the early Earth – until now. 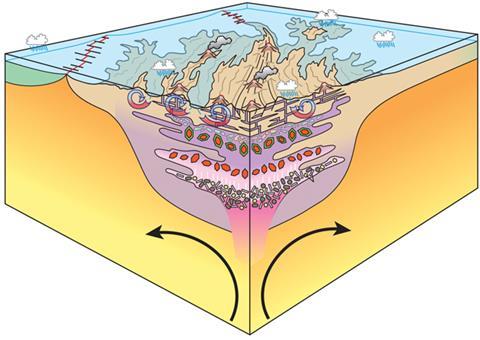 Early continental crust may have formed when magma from the mantle cooled and crystallised, forming islands in the ocean

In their study, Jesse Reimink and colleagues from the University of Alberta in Canada report the discovery of a 4.02 billion year old rock unit from north-western Canada - one with geochemical signatures matching those of rocks formed in modern-day Iceland. Dubbed the Idiwhaa Tonalitic Gneiss (named after the word for “ancient times” in the local Tli?cho language), the rocks display iron-enrichment, negative Europium anomalies and unfractionated patterns of rare earth elements, as well as low oxygen isotope ratios within the magmatically-formed mineral zircon – all of which indicate formation from basaltic magma and hydrothermally altered oceanic crust. ‘The findings of our study provide the first direct evidence that Earth’s earliest continental crust may have formed in an Iceland-like setting,’ says Reimink.

Samuel Bowring, a geologist at the Massachusetts Institute of Technology, calls the work a ‘nice study’, highlighting how it shows that the whole-rock and zircon-specific geochemical signals have been unperturbed by later metamorphism. He cautions, however, against assuming that an Icelandic model can be applied to the larger and compositionally varied sequence of Acasta Gneisses, of which the Idiwhaa unit is one part. ‘Modern plate tectonics is responsible for a wide diversity of igneous rocks, including [those found in] Iceland,’ he says, ‘so I think it may be a bit premature to conclude that an Iceland-like setting is responsible for Earth’s oldest crust.’

In addition, Bowring comments that the researchers’ model does not explain previously reported evidence for the inheritance of older zircon – of up to 4.2 billion years in age – in other Acasta rocks.

Some of these concerns may be addressed, however, with the researchers planning to continue their investigations by examining the younger (3.4 – 3.9 billion year old) rocks in the wider Acasta Gneiss Complex. The aim will be to assess how an Iceland-like proto-continent might evolve to produce the more typical crust composition seen in younger rocks.