Funding for science in eastern Europe continues to be overlooked, despite years of economic growth

While the recently released 2012 draft EU budget is set to increase research spending by 13 per cent, scientists in eastern Europe are continuing to struggle. When eastern Europe joined the EU researchers had high hopes that their lot would quickly improve, but many are still working in conditions that lag far behind their western European colleagues. And although most of these scientists are confident research funding and conditions in the coming years will steadily improve, even the most optimistic of outlooks leaves them trailing western Europe by the end of the decade.

’The general feeling, I would say, is frustration,’ says Andrzej G?rski, vice president at the Polish Academy of Sciences and a former president of the Medical University of Warsaw. ’Science has never been a priority in Poland. This is sad but true.’

Research spending in Poland, according to EU statistics, was 0.68 per cent of GDP in 2009, far below the combined EU goal of 3 per cent by 2020. G?rski notes Polish research spending as a percentage of GDP has been dragging near current levels since the mid 1990s, despite the fact that Poland’s economic growth in recent years has been stronger than many other European nations. ’This adds to the frustration of Polish science,’ he says. 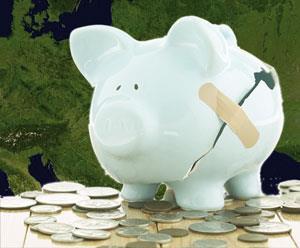 Polish spending on research is just 0.68 per cent of GDP - well below the EU average

This frustration is shared by scientists across eastern Europe, which has been hit particularly hard by the global financial crisis and is still struggling economically to catch up with western Europe. Eastern European scientists can only look on enviously at the generally much better conditions enjoyed by their colleagues in western Europe.

180 million of EU science and education funding into a road construction programme. Both diversion requests are awaiting European Commission approval.

Norbert Kro?, a physicist who recently stepped down as vice president of the Hungarian Academy of Sciences but is still an advisor to the Hungarian president, says: ’My number one priority in Hungary is improving the research infrastructure.’ Hungary spent just 1.15 per cent of GDP on R&D in 2009. Kro? says: ’I want the mobility of science in Hungary to be a two-way street, not just a one-way street out.’

But while hopes are high among scientists in eastern Europe, they are tempered by reality. Gorski admits that it would be ’unrealistic’ to expect Poland’s research spending to rocket to the EU’s 2020 target.

Indeed, research spending by member states did not come close to hitting the Commission’s first 3 per cent of GDP research funding target by 2010, a goal that was set in 2000 as part of the Lisbon Strategy. Instead, by 2009, the combined EU R&D spending was limping along at only 2.01 per cent of GDP. Last year, the Commission set a new 3 per cent target date of 2020.

Mark English, a European Commission spokesman for research, innovation and science, emphasises that research spending in most eastern European member nations is not expected to surpass 2 per cent by 2020.

’The 3 per cent is a target for the EU as a whole,’ says English. ’There has been a serious misrepresentation of the 3 per cent target. Creating a one-size-fits-all target would be nonsensical.’ Instead, he adds, ’New member states of the European Union have set ambitious, but realistic, targets.’

English says the system for setting 2020 national targets and monitoring progress is ’much smarter and more coordinated’ than the Lisbon Strategy. He says that the combined GDP R&D percentage target for all EU nations for 2020 now totals around 2.7 per cent, with plans to push it to 3 per cent over the next few years.

G?rski says that the Polish Science Academy’s budget is so tight that it is not able to hold membership in many important international science organisations. ’We are really in a difficult situation,’ he says. ’If there is an increase in membership fees, then we try to negotiate.’

Nonetheless, he says the lack of adequate funding has encouraged efficiency in Poland. ’Mediocre research does not receive competitive funding,’ he says. ’Researchers need to be in the upper 10 per cent to be considered for a grant. So that is a healthy situation.’

’I see researchers coming from the UK or Sweden who are confident, who know what they want,’ says Kro?. ’And then some from eastern Europe are sort of apologetic: "Excuse me for being here. I need some help".’ He adds that some western European scientists still think that ’nothing can be good that comes from the East. So both sides still have to learn.’