Scientists have used the thermodynamic parameter entropy – a measure of the disorder of a system – to track the changes in the structure of a battery electrode, without destroying the battery itself. As the use of electric vehicles rises, this information could be valuable in estimating and extending the lifetimes of batteries in electric cars. ‘The lifetime of a car is relatively long, but each driver will have a different driving pattern,’ says Jang Wook Choi from Seoul National University in South Korea. ‘We need to be able to see how healthy a battery is now and how fast a battery is degrading over time.’

To determine the entropy and diagnose the state of the battery’s LiCoO2 cathode, Choi’s team measured the open circuit voltage (the voltage at zero current) at a variety of different temperatures. When they plotted the voltage against temperature variation, the slope of the graph gave the entropy change of the material. This gave them insights into the underlying atomic arrangement, like cation mixing – where metal ions switch places in the lattice – and metal vacancies in the structure. Importantly, the team noticed that when they doped the LiCoO2 cathode with nickel, disorder in the system increased which improved the stability of the framework and extended its cycle life. 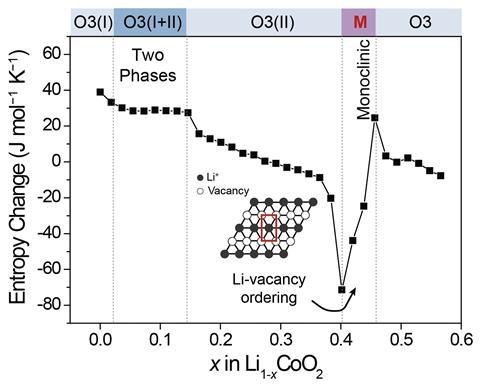 The technique has several advantages over current methods. Battery management systems today measure voltage, current and temperature. While these metrics tell us how a battery is currently performing, they do not reveal anything about the structure of materials inside it. ‘Batteries are chemistry – we are dealing with materials that are undergoing a chemical reaction with lithium ions and so we need technology that can connect with the material inside the cell,’ says Choi.

The technique is also non-destructive. In recent years, scientists have developed a variety of chemical methods to probe the structure and bonding in battery electrodes. However, as Venkataraman Thangadurai, an expert in solid-state batteries from the University of Calgary, Canada, explains, ‘these generally require time-consuming spectroscopy and chemical analysis methods.’ As well as being less efficient, these methods all involve dismantling the battery and destroying the cell, creating waste and costing money. By monitoring the change in entropy, it is possible to determine the state of the electrode while the battery is in use and without causing any damage.

The technique could be useful when managing electronic waste and deciding if a battery should be re-used or recycled.