Give your chemical intuition a regular workout 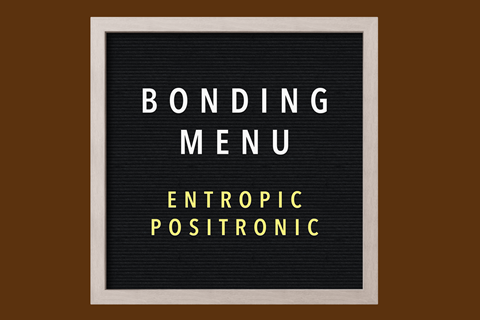 The season of resolutions is upon us. Chemistry World obviously isn’t the place to find an article on faddy new year diets, but some of our stories from the end of last year might have given you the impression that chemists were preparing to give up electrons in 2020. Instead, they’re opting for entropic and positronic bonds.

When I think of entropy, I immediately think of disorder, randomness, chaos – not the order and stability I normally associate with bonding. This, of course, is an oversimplification and even though it feels counterintuitive, entropy can in fact drive particles to assemble – hard particle colloidal crystals can actually be more complex and diverse than a disordered fluid. The interactions between these particles are directional and thermal fluctuations can break them. That sounds very bond-like. Yet it’s local entropy, rather than electron density ordering the system. Does that count as a bond? That’s semantics.

What’s more important is learning how to use these entropic interactions. Scientists typically focus on tuning enthalpic interactions when designing new materials with particular properties. This is a sound and successful strategy – enthalpy is simple to measure and understand – but while the effects of entropic forces might be trickier to evaluate, entropy can enable certain systems, including some crystals and mesophases, to access different arrangements and behaviours that would not result if we only relied on energetic forces.

Does that count as a bond? That’s semantics.

Much like entropic associations, positrons are another electron-free option for the bond-curious chemist. The computational study we cover about bonds in positron dihalides adds to research proving that positronic bonds are non-electronic covalent bonds and fundamentally distinct from positrons attaching to stable atoms and molecules. That an antiparticle can be responsible for bonding anions that would otherwise repel each other hints at the potential for antimatter to be pro-chemistry.

These unusual bonds are definitely exceptions; electrons will forever dominate chemistry. But, whether it’s debating the electrostatic nature of hydrogen bonds or finding an interaction that shares both metallic and covalent characteristics, I applaud the chemists who give bonding a bit of a rethink every now and again.