Enzyme binds both sides of the mirror

European chemists have discovered that both mirror-image forms of a particular compound can bind at the same time in the same site of an enzyme, a phenomenon that has never been seen before. The finding has significance for drug discovery screening and studies of how small molecules interact with proteins.

Rolf Breinbauer from Graz University of Technology, Austria, and Wulf Blankenfeldt from the Max Planck Institute of Molecular Physiology in Dortmund, Germany, were studying a metabolic enzyme from a species of the bacterium Burkholderia cepacia, using racemic mixtures of chiral probe molecules to find ones that bound in the enzyme’s active site. In most cases only one form of a chiral (or ’handed’) molecule would bind at once, but they found that in one instance both enantiomeric forms occupied the binding site at the same time.

’If you read the textbooks about enantiomers,’ says Breinbauer, ’there’s a simplified notion that one enantiomer is good and the other is either bad or just idle.’ He explains that for most proteins (apart from certain enzymes that have evolved to cope with wide ranges of substrate molecules) either only one enantiomer will bind, or both can bind individually - with the assumption that one form will be significantly more active than the other. ’Our findings show that the world is more complicated,’ he adds.

While each individual enantiomer can bind to the enzyme seperately, Breinbauer notes that the arrangement of the molecules within the binding site is quite different when both bind together. This could lead to cooperative effects, producing either an enhanced or diminished response relative to the individual enantiomers. 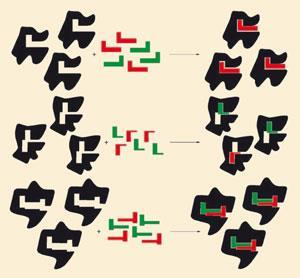 The three ways enantiomers can bind in enzymes: only one enantiomer binds (top); each binds individually (middle); both bind together (bottom)

He adds that this could have relevance in drug discovery screening, where mixtures of both enantiomers of chiral compounds are routinely screened together to find initial hits. ’People need to consider more options when interpreting binding data from racemic mixtures.’

Dafydd Owen of Pfizer Research Chemistry in  Sandwich, UK, agrees that the finding is an important reminder that chemists need to be open-minded about interpreting screening data. It also highlights the inherent trade-offs made when screening mixtures - particularly in high-throughput screens when mixtures of several compounds are tested at once.

Owen sees most interest in the discovery in the area of fragment-based drug discovery, where small ’fragment’ molecules found to bind to a drug target are linked together to make potential drug molecules. ’As a medicinal chemist,’ he adds, ’my immediate thought was to join the two structures together to incorporate the best of each and make a hybrid.’ He points out, however, that from a fragment point of view it is almost irrelevant to the enzyme that the two molecules happen to be mirror images of each other, ’despite their apparent similarity, nature views enantiomers as very different molecules’.