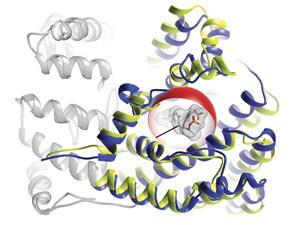 Superimposed structural models of the BFS (yellow) and ADS (blue) enzymes, which catalyse the synthesis of terpenes

UK researchers have investigated the formation of cyclic terpenes in Artemisia annua, the plant source of antimalarial drug artemisinin, and found that a collection of amino acids working together as a network are likely to be responsible.

As synthetic chemists well know, cyclic molecules are extremely useful but rarely straightforward to make. Converting a linear, organic molecule into a cyclic one typically involves making and breaking several carbon-carbon bonds in the same step while holding all the parts in a specific conformation.

But these compounds have been synthesised in nature for millions of years, so Paul ÓMáille and colleagues at the Institute of Food Research decided to investigate the production of cyclic compounds in A. annua, which is also known as sweet wormwood.

The team started with amorpha-4,11-diene synthase (ADS) and (E)-ß-farnesene synthase (BFS), a pair of enzymes from the plant which are structurally very similar – 49% of the amino acid residues are the same. However, ADS produces cyclic compounds whereas BFS makes less complex, linear terpenes.

They reasoned that the important parts of the enzyme enabling cyclisation would lie within the active site or nearby, and thus focused their attention on the residues within 6Å of this region. Within this space, ADS differed from BFS by 24 residues, meaning there were effectively 24 binary components which could be set to either ‘BFS’ or ‘ADS’, and consequently over 16 million permutations, each corresponding to a slightly different hybrid of the two enzymes.

This was too many to test individually, so the team synthesised a subset of 27,000 hybrids in the BFS background, incorporating combinations of two to 11 substitutions from ADS in any given enzyme. From this library, they screened 282 enzymes produced using Escherichia coli bacteria and tested for activity. Strikingly, three enzymes generated cyclic terpenes and shared a single mutation called Y402L.

When this ‘gateway’ mutation was transferred to wild-type BFS, it was enough to generate cyclisation. But further tests revealed that it was part of a network of three residues that together interact to activate, suppress or reactivate cyclisation.

‘No residue is an island,’ says ÓMáille. Instead, mutations generally work together in a coordinated fashion, like components on a circuit board. A gateway mutation, like Y402L, might be vital, he says. But it is the context provided by other residues that define its role.

The group decided to test how applicable this network might be to terpenes in general and transferred it to the equivalent of BFS in Citrus junos, a fruit tree that differs in many ways from A. annua. This also created cyclisation.

The work represents important insight beyond terpene synthases, says Reuben Peters, a biochemist at Iowa State University in the US. The researchers were able to define a small set of residues that were distal (located far from the active site and each other) but nevertheless synergistically influenced product outcome. ‘It may turn out that such distal interactions are important in enzymatic activity more generally,’ Peters says.