Air pollution from the 10,000 largest industrial facilities cost the region as much as 169 billion euros in 2009

Europe is paying a high price for air pollution, according to a new report, which estimates that emissions from the region’s 10,000 largest industrial facilities caused between

169 billion worth of damage to human health and the environment in 2009 alone.

The EEA report is based on the most recent emissions information from the European Pollutant Release and Transfer Register (E-PRTR), which collects data from 28,000 industrial facilities in Europe. Report co-author Martin Adams tells Chemistry World that 50 per cent of the total costs incurred are as a result of emissions from just 191, or 2 per cent, of the 10,000 facilities examined by this study. Three-quarters of the total costs are caused by just 622 facilities, 6 per cent of the total. ’Another point to note,’ he adds, ’is that the total costs of harm to health and the environment from air pollution will actually be higher than the numbers presented in our report, which are just for the industrial sectors included in the E-PRTR.’ 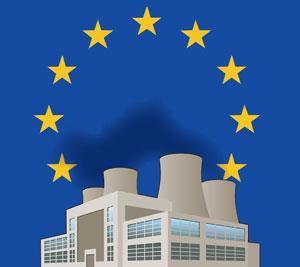 Energy plant emissions accounted for the majority health and environmental damage, costing the EU between

111.6 billion, followed by production processes, manufacturing and combustion, waste disposal and agriculture. Breaking that down further, Adams says that chemical sector emissions, such as synthesis of inorganic and organic chemicals, agrichemicals and pharmaceuticals, contributed about 5.5 per cent of total estimated harm.

63 billion of harm to the European economy. Other pollutants included in the study are nitrogen oxides, sulfur dioxide, heavy metals and organic micro-pollutants.

34 per tonne, significantly lower on a per tonne basis than those assigned to other pollutants. ’The costs to human health and the environment resulting from emitting 1kg of dioxins and furans is very significantly higher than the damage cost arising from the release of 1kg of CO2,’ he says. ’However, the enormously larger amount of CO2 emitted across Europe, around a trillion times greater, means that CO2 emissions contribute the most to the total aggregated damage costs.’

Voulvoulis notes, though, that the report doesn’t consider the necessity of the services supplied by the facility. ’In the future, efficiency and productivity data for individual facilities could be added to the equation, so that we know emissions and associated costs per unit of product or service delivered at each site.’