With patience, cool nerves and steady hands, chemists in Germany have purified, isolated and characterised previously unseen azides of mercury, which are likely to explode violently under the slightest provocation. The work has given new insights into the chemistry of mercury, whose compounds first fascinated alchemists hundreds of years ago. 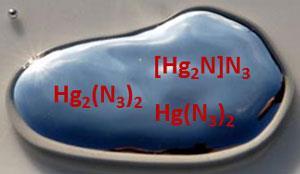 Mercury azides are tricky to study in the laboratory because they are highly toxic and can be extremely explosive, so gaps remain in our knowledge of this branch of chemistry. Millon’s base, nitridodimercury hydroxide, [Hg2N]OH·2H2O, discovered more than 150 years ago, is an especially interesting combination of Hg and N in a three-dimensional cationic framework.

A team led by Axel Schulz and Alexander Villinger of the University of Rostock, has succeeded in purifying the azide salt of Millon’s base, [Hg2N]N3, the first nitrodo mercury azide compound reported. While still hazardous, the salt is relatively straightforward to synthesise, but not in a form with sufficiently homogenous crystal phases suitable for structural studies. ‘To do this we carried out a series of ion-exchanges that altogether took around 300 days. This produced a highly phase-pure, microcrystalline material,’ says Schulz. ‘But once you start to dry the crystals they become highly explosive – as mad as a hatter. For these experiments it is necessary for the chemist to wear leather clothing, a face shield, Kevlar gloves and ear protection. All lab personnel are warned when the experiment is taking place.’

The team also isolated and characterised for the first time a particular structural isomer of Hg(N3)2. This exists in two structural forms, an a form, which is relatively stable, and the ß form, which is unstable and converts spontaneously to its a counterpart.

‘The beta phase is highly sensitive,’ says Villinger. ‘As crystals form and drop to the bottom of the flask, the impact causes small, audible detonations – micro-explosions. In some cases the glassware breaks.’

The team was able to carry out detailed characterisation of the compounds and the research has filled in important gaps in our knowledge of mercury azides, according to experts in the field. Wolfgang Beck of the University of Munich, comments that ‘the preparation and structure determination of mercury azides is most remarkable and impressive,’ a view echoed by Stephan Schulz of Duisburg-Essen University in Germany, who adds, ‘keeping the highly-explosive character of these mercury azides in mind, these detailed studies become even more impressive.’

Axel Schulz acknowledges the difficulty and danger in working with these materials, but notes, ‘while it is hazardous, we understand the nature of the hazard and we plan the experiments and take precautions accordingly. So while there are dangers, they are dangers that we can deal with. The real problems in a chemistry lab occur when you are not aware that the danger exists.’