The trade in illegal pesticides is widespread in Europe and growing, according to the European law enforcement agency

Counterfeit pesticides that can ruin crops, as well as farmers’ reputations, are finding their way into European fields with increasing regularity. According to the European law enforcement agency Europol, which earlier this month published a set of recommendations for stamping out counterfeits, the trade is on the rise.

The illegal trade in pesticides is worth hundreds of billions of dollars globally. Europol has released figures indicating that as much as a quarter of the pesticides bought and sold in some European countries are counterfeit. Although it would not provide detailed growth figures or comment on which member states are being worst hit, a spokesperson for the agency tells Chemistry World that ’production, mostly originating from Asia, has increased in recent years’. Last October, the Chinese Ministry of Agriculture announced it was taking action against the illegal pesticides trade. Europol suggested criminals were using the internet to glean information on how to make counterfeit pesticides, as well as to market their products. 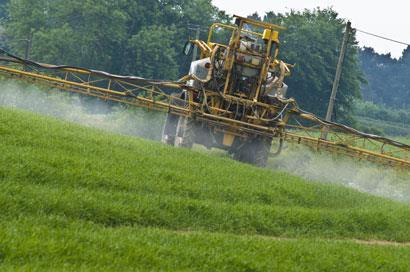 Europol, which gathers intelligence on the illegal trade and coordinates ongoing investigations, says it is aware of seizures of counterfeit pesticides imitating very famous brands: ’In those cases, the goods were stopped from entering the legal market according to the regulations on the intellectual property right infringements.’ More worrying are those that contain banned chemicals such as endocrine disruptors - which interfere with hormones - or those that are transported without due care and attention to health and safety.

According to Phil Newton, senior manager of communications at the European Crop Protection Association, many counterfeit pesticides are made in China and transported to depots in Eastern Europe, but the problem is pervasive across the whole of mainland Europe. In one example, he says, ’enough herbicide to completely de-forest Hungary’ was seized from a passenger plane arriving in Budapest from China - it was marked emulsifier and had a flashpoint near room temperature.

So, do farmers know what they’re doing when they’re covering crops in illegal chemicals? Some do, some don’t, says Newton. ’There are the ones that are duped - who pay full price for what they think is a brand name product. And there are others who might ask the question, "Haven’t you got anything a little cheaper?" and the distributor reaches under the counter and grabs a bottle and says, "Well, you can use this and I can give it to you for half price."’

Hans Muilerman, chemicals coordinator for pressure group Pesticide Action Network (PAN) Europe, thinks farmers are given too much slack. He claims some rose farmers are guilty of using illegal mixtures, produced in Russia, that contain six or seven active ingredients, because it is easier than identifying the pest and finding a specific chemical to deal with it. Meanwhile, enforcement is weak, he says. ’The enforcement bodies know about it, but they are not allowed to fine the farmers, says Muilerman. ’And the fines are not high enough - they’re fines from 20 years ago when we had small farmers and small growers.’

Europol’s recommendations for slowing the spread of counterfeit chemicals include cross-border investigations, increased cooperation in enforcement and research into the traceability of hazardous materials used in illegal pesticides. It also recommends developing a ’comprehensive picture’ of the legal framework governing the EU pesticide trade.

Newton claims it’s the legislation that’s to blame - a minor change to the law, he argues, would allow customs officers to carry out proper checks on suspicious containers at the border. He says criminals are taking advantage of a loophole that means customs officers can only impound and destroy bottles and labels, which are often transported separately to containers filled with the chemicals. Fighting counterfeiting at national borders has proven the ’most effective tool’ in protecting farmers, according to a study by IPR Business Partnership, which works with anti-counterfeiting organisations and contributes towards enforcement initiatives.

Besides wreaking havoc in the field, counterfeits that mimic well known brands are causing problems for legitimate pesticide producers. In 2009, BASF, Bayer CropScience and DuPont all won cases against counterfeiters operating in Europe, but only after long, drawn out legal battles. To add insult to injury, legitimate companies are often charged with destroying the copycat products.