Structure of enormous multi-enzyme has finally been detailed

X-ray crystallographers in Switzerland have achieved the Herculean task of elucidating the architecture of one of biochemistry’s most impressive molecular machines, the multi-enzyme fatty acid synthase. This megasynthase is discussed in most biochemistry textbooks and has been studied for decades, but scientists have never before had a high-resolution structure of the enzyme. 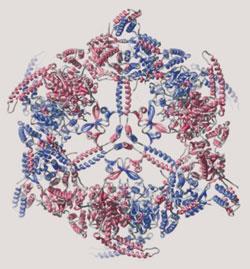 The central wheel of the fatty acid synthase structure from the fungus T. lanuginosus

The project, which took more than five years to complete, has revealed the intimate structures of the massive protein - all 2.6 megadaltons - at a resolution of 3.1 Angstroms. The structure shows that this giant biochemical factory for producing fatty acids performs six separate chemical activities.1

The protein consists of three main structures: a central equatorial disk or wheel, on either side of which is a dome-shaped reaction chamber. Each dome houses three complete sets of enzyme activities.
Nenad Ban and his team from the Institute of Molecular Biology and Biophysics at ETH Zurich in Switzerland, also uncovered the way in which the enzyme constructs the fatty acid chain from its substrates, using an unusual mechanism to tether the substrates in position while the chain is growing.2

’A two-carbon substrate becomes loaded onto a carrier protein that is covalently anchored at two points to the enzyme complex,’ said Marc Leibundgut, one of the Swiss researchers who with Simon Jenni determined the structures. The carrier protein domain swings the substrate around the reaction chambers, visiting each catalytic site in turn. One cycle around the sites results in two carbons being added to the chain. This continues for seven or eight cycles, resulting in a 16- or 18-carbon fatty acid. 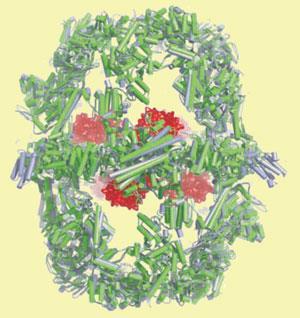 The researchers suspect that by covalently tethering the substrate within the complex there is no loss of intermediate product to the internal fluid of the cell by diffusion, increasing the efficiency of the process.

The team studied fatty acid synthase structures from fungus and yeast. Since fatty acid synthase has a different structure in mammals, it could be a potential target for anti-fungal drugs, said Leibundgut. Furthermore, the enzyme is similar to that of mycobacteria, some of which cause important diseases such as tuberculosis. Knowledge of the structure of the enzyme could provide the basis for developing anti-mycobacterial compounds.