Fireproof coatings made from DNA

Could a next generation of eco-friendly flame-retardant coatings be made from DNA? 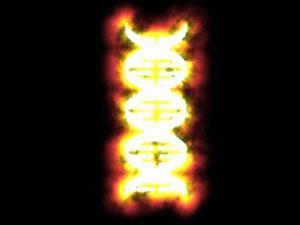 A new type of flame-retardant coating for textiles has been developed from a most unlikely source. Researchers from Italy have used DNA, extracted from herring sperm, to fireproof samples of cotton, and have found its performance to be on a par with commercially manufactured materials.1

The flame retardant industry is big business (one recent study estimates 465,000 tones to have been produced in Europe during 20062), but many of the chemicals used are hazardous to the environment. Traditional halogenated flame retardants tend to bioaccumulate and are toxic to animal and human health, hence their use is becoming increasingly restricted in both the EU and US. DNA, on the other hand, is abundant, naturally occurring, and biodegradable – and just happens to have all of the characteristics of a classic flame-retardant chemical.

Giulio Malucelli, Politecnico di Torino, who leads the research group that is developing the DNA coating, explains that an intumescent material reacts in three ways when it is exposed to fire. ‘Firstly, carbon sources act as thermal insulators, producing char and limiting the production of volatile substances,’ he says. ‘Secondly, sources of acid dehydrate cellulose, producing carbon and adding to the char. Lastly, a blowing agent releases non-combustible gas, such as water vapour, ammonia or carbon dioxide, forming a physical barrier towards oxygen.’

To test their theory, Malucelli’s group applied a methane-gas flame to samples of cotton that had been coated with DNA. After two horizontal applications of the flame, each lasting three seconds, the samples did not burn at all. Likewise, when exposed to an irradiative heat flux of 35kW/m2, no ignition was observed.

But Baljinder Kandola of the University of Bolton warns that more testing is needed before the DNA fire-proofing can be considered a viable alternative to current flame-retardant materials. ‘DNA has helped in reducing the flammability of cotton,’ she says, ‘however, from the limited flammability data provided [by Malucelli], it is difficult to quantify its flame-retardant effect. From commercial point of view, it could be an expensive solution, but is environmentally friendly.’

In fact, there are more barriers for Malucelli to overcome before fireproof DNA can be considered for industrial-scale use, perhaps the most significant being durability. At present, the DNA coating does not survive the laundry process, making it impractical for long-term use.

‘Fixing DNA to textiles, so it doesn’t come off in the wash, is a possibility’ explains Malucelli. ‘We are exploring the use of sol-gel treatments… and there are other possibilities involving photo polymerisation reactions, using reactive monomers to which DNA has already been added. But it is necessary to entrap or covalently link DNA to the fabric substrate,’ he says.

‘I think the current high cost of DNA is largely down to the purity in which it is required currently for applications in molecular biology,’ Malucelli adds in response to comments that his green flame retardant is too costly. ‘A future reduction in price is not impossible; think of what has happened to the wholesale price of carbon nanotubes. Apart from herring sperm there is always the possibility of extracting DNA not only from other animals but also vegetables,’ he says.