Scientists in the US have made a major advance in the development of novel light-emitting materials by designing the first purely organic phosphorescent compound. The finding could open the way for a new generation of materials for electronic displays and lighting, exploiting the relatively low cost and chemical versatility of systems based on organic molecules.

Currently, phosphorescence - the slow release of energy from a compound in the form of light - is essentially confined to inorganic or organometallic systems. The phenomenon relies on photons exciting electrons to a so-called triplet state. This means that the electrons, as well as being shunted to a higher energy level, must reverse or decouple their spins. While this can be achieved in a small selection of metal-free organic systems, the organic structure absorbs the energy as it is re-emitted, with little if any emerging as light. Metal ions provide an electronic environment that is much more conducive to the formation of the triplet state and hence more efficient phosphorescence.

Now, Jinsang Kim and colleagues from the University of Michigan have developed a metal-free organic phosphor from halogenated aromatic carbonyl molecules. The carbonyl group provides electrons that can be excited to the required triplet state, while the halogen - most efficiently bromine - performs two roles. Firstly it acts in a similar way to a metal ion, producing a so-called heavy atom effect and promoting the necessary spin decoupling of the excited electrons and secondly produces close, strong non-covalent interactions between the molecules that further enhance the heavy atom effect. With these properties combined, crystals of the material glow when excited by light. 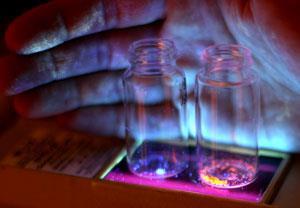 The organic phosphors being excited by UV light

’By making small changes to the structure of the molecule we can tune the system to emit different colours of light,’ Kim says. ’While the efficiencies are not as high as organometallic systems, this is the first system that has achieved significant phosphorescence without metals.’

’This is very exciting,’ says Paolo Coppo, of the Centre for Phosphors and Display Materials at Brunel University in the UK. ’Organic phosphorescence has been the holy grail in the OLED [organic light emitting diode] research community for the last two decades. It appears we are one step closer to realising that dream’