A simple, practical method for making popular trifluoroborate reagents without etching glassware or tedious purification procedures has been developed by chemists in the UK

A simple, practical method for making popular trifluoroborate reagents without etching glassware or tedious purification procedures has been developed by chemists in the UK. The method should make trifluoroborates more readily available, especially those containing more delicate functionality.

Trifluoroborate salts have been used as reagents since the 1960s, explains Guy Lloyd-Jones from the University of Bristol, who led the team. But their popularity has exploded in the last 15-20 years owing to their synthetic utility and ease of handling compared with other boron-based reagents like boronic acids and esters. 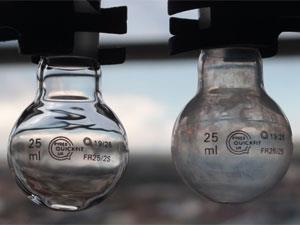 Lloyd-Jones explains that while the current methods for making the reagents work well and are quite reliable, they have a significant drawback in the fact that they require chemists to use hydrofluoric acid or KHF2. ‘They are highly corrosive to glassware,’ says Lloyd-Jones, so most people use special plastic equipment for the reaction. He adds that purification can also be quite laborious as ‘you’re left with a mixture of salts, from which you have to extract the trifluoroborate. That often requires multiple extractions with acetone, or even Soxhlet extraction, then recrystallisation.’

It was having to make several trifluoroborates - to study how they hydrolyse to form boronic acids - that prompted Lloyd-Jones’s group to think about a simpler way of making them. ‘We’d experienced the practical difficulties and we knew about this equilibrium with the boronic acids,’ he says, ‘so we wondered if we could push the equilibrium all the way back to the trifluoroborate without using KHF2.’

Using potassium fluoride, as a source of fluorine, and a weak acid, to provide the necessary protons and remove excess potassium from the reaction mixture, the team successfully converted boronic acids and esters to trifluoroborates. To help drive the equilibrium further, the team took inspiration from wine and used tartaric acid. As it reacts, the tartaric acid forms potassium bitartrate or cream of tartar - the constituent of the tiny crystalline ‘wine diamonds’ often found at the bottom of wine bottles - which is extremely insoluble and crashes out of the solution.

But there was one more hurdle, says Lloyd-Jones: ‘The potassium bitartrate precipitate was so fine that we couldn’t filter it!’ Adding a small amount of water made the crystals flocculate, together with any excess potassium fluoride. That means that the reaction mixture can be simply filtered and the solvents evaporated to leave behind the pure trifluoroborate.

Hon Wai Lam from the University of Edinburgh, UK, says that the simplicity of the method should lead to even more different trifluoroborates becoming available – certainly to researchers making them in their own labs, and possibly from commercial suppliers. ‘Especially in difficult cases with more complex or delicate boronic acids, the previous method can be problematic – not necessarily because the reaction didn’t work, but because you couldn’t get the stuff out clean,’ Lam says.  ‘This new procedure looks much better in that respect.’

Lloyd-Jones says he has approached several companies with a view to partnering to patent the process. ‘They were very interested, but they said they couldn’t justify the cost of the patent application and protection at the moment,’ he says. ‘We could have put in a simple application ourselves, but the cost of protecting it would probably outweigh the potential benefit from licensing it to another company, so we decided just to publish it.’