Chemists in the US have devised a dual catalyst strategy to tame the highly reactive iminium ion - a key intermediate in many complex organic syntheses - to give a high degree of stereochemical control over subsequent reactions of the ion. The technique could lead to a new approach to controlling the stereochemistry of reactions that are catalysed by acids.

The iminium cation, characterised by a C=N bond, is typically generated through donation of a proton to an appropriate substrate by a Br?nsted acid. It reacts readily with electron-rich molecules and is widely used in organic synthesis. However, iminium is a flat molecule and can react on either face equally happily, forming a chiral mixture of products, whereas in many cases only one stereoisomer is wanted.

Now, Eric Jacobsen’s team at Harvard University has shown how iminium ions can be forced to only react on one face of the molecule, producing only a single stereoisomer of the product.

When the acid catalyst donates its proton to create the cationic iminium, the counter anion from the acid weakly interacts with the cation through electrostatic forces.

When a chiral urea co-catalyst is then introduced, it grabs onto the anion and is brought into proximity with the associated iminium cation. The urea then ensares the cation through a series of hydrogen bonds, electronic and electrostatic interactions. 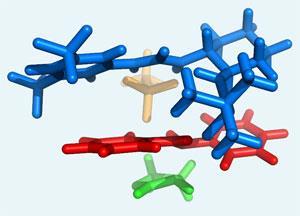 A chiral urea (blue) binds a sulfonate anion (yellow) and blocks one face of the associated iminium cation (red), allowing the nucleophilic reaction partner (green) to approach from just one side

This 3-dimensional complex blocks one face of the iminium so that only the other face is available for reaction. When an electron-rich alkene encounters the complex, it reacts with the exposed face of the iminium to produce a single chiral product. Once the reaction has occurred the urea dissociates to bind to another anion.

The research team demonstrated the usefulness of the approach by using it to synthesise the stereochemically complex natural heterocycle tetrahydroquinoline.

Jacobsen believes the strategy should be applicable across a wide range of reactions. ’A lot of chemistry is promoted by protons, and the question is how do we make that chemistry selective?’ Jacobsen says. ’This strategy should work for anything involving a cationic intermediate and with catalysts other than urea.’

Varinder Aggarwal, an expert on asymmetric organic synthesis at the University of Bristol in the UK, is impressed by the work. ’The system they have created is analogous to many enzymatic reactions where co-operative catalysis is endemic,’ Aggarwal says. ’This work paves the way for a major new strategy in catalysis since a vast number of reactions are catalysed by a ’simple’ proton. Many of these reactions will be amenable to the urea-based catalysis reported here and so it has the potential to control enantioselectivity as well. It is an amazing system.’