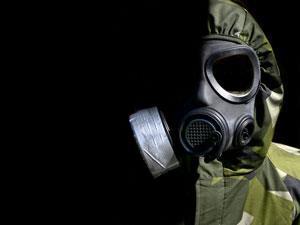 Evidence is building that factions in the Syria conflict are using the deadly chemical weapon sarin. The latest announcement from the French government claims that tests on samples smuggled out of the war-torn country by journalists from French newspaper, Le Monde, prove conclusively that sarin was used in Jobar between the 12–14 April, and in Sarraqueb on the 29 April.

‘The presence of sarin residue in blood and urine samples taken from six victims proves beyond doubt that they were exposed to this gas, which is 500 times more toxic than cyanide,’ said Laurent Fabius, the French minister of foreign affairs. Commenting on the chain of custody for the samples, Fabius said that the French government had ‘the entire chain, from the time the attack took place to the time when people were killed, and the time we took the samples, and the time we had them analysed’. The French government are blaming Bashar Al-Assad’s forces for deploying the sarin that it says it has detected in victim’s samples.

Samples from Syria have also recently been analysed at the UK’s Defence Science and Technology Laboratory (DSTL) at Porton Down. ‘DSTL has conducted tests on physiological samples from inside Syria. The material tested positive for sarin,’ a spokesperson tells Chemistry World. DSTL declined to answer any further questions relating to the samples.

Sarin, also known as GB, is a fluorinated organophosphorus compound, an odourless and fast-acting nerve agent that was first produced in the 1930s by German scientists who were trying to make pesticides. The nerve agent was stockpiled by the Germans during the second world war but was never used for reasons that still remain unknown. Just 0.5mg can kill an adult if absorbed through the skin or inhaled. Sarin gained notoriety for its use in 1988 on the city of Halabja in northern Iraq. The attack by Iraqi forces was part of an attempt to retake the city after it was captured by Iranian forces and anti-regime Kurdish elements. It is estimated that as many as 5000 people died in the attacks which took place over two days. Sarin was once again in the news after the Aum Shinrikyo cult released the nerve agent in the Tokyo underground in 1995, killing 13 and injuring many more. A year earlier, also in Japan, a sarin release in Matsumoto killed eight.

IMPA (right) is a marker for the use of sarin (left)

‘Sarin is usually in liquid form and its effects can be seen in seconds and cause death within minutes,’ says Tom Bassindale, a forensic toxicologist and forensic science course leader at Sheffield Hallam University, UK. Various sample analysis methods are appropriate, according to Bassindale, particularly gas chromatography–mass spectrometry (GC-MS) or liquid chromatography–mass spectrometry (LC-MS). ‘These will test the biological samples for the presence of the parent compound and also the main breakdown product GB acid, or isopropyl methylphosphonic acid (IMPA),’ he explained. ‘IMPA is a unique marker of sarin exposure.’

In IMPA, sarin’s fluoride ion is replaced by a hydroxyl group. ‘There is a further breakdown product also tested for, called methyl phosphonic acid (MPA), but this is common to many different nerve agents and also, potentially, fire retardant chemicals,’ says Bassindale. ‘As the sarin is broken down very rapidly in the body the chance of detecting it is slim, unless samples are taken within a few hours of exposure.’

Both sarin and IMPA bind to the enzymes acetylcholinesterase and butyrylcholinesterase in the blood. This prevents the breakdown of the neurotransmitter acetylcholine, which is critical to proper nerve function. There is a possibility of detecting the products of these reactions in the victim’s blood for 16–26 days after exposure. The resulting acetylcholinesterase adduct is more stable than either sarin or IMPA, and concentrates in red blood cells. The butyrylcholinesterase adducts are mainly in the blood plasma. Both of these adducts can be broken down in the laboratory for GC-MS or LC-MS detection. ‘These methods were used to determine exposure to sarin in samples from victims of the Tokyo attack,’ Bassindale explains. Forensic specialists may also test environmental samples, such as water or soil, for IMPA or MPA for evidence that sarin has been used.