With just a slight dip in a tungsten filament bulb’s intensity, Canadian researchers have created channels that light can’t enter. Kailash Kasala and Kalaichelvi Saravanamuttu from McMaster University in Hamilton, Ontario, found that these ‘self-trapped black beams’ form spontaneously in their photocured polymer. ‘This is an added piece of fundamental knowledge that can be used in photonics,’ Saravanamuttu tells Chemistry World.

Usually, light and dark areas diverge as they travel further from their source. ‘Imagine projecting a shadow onto a screen,’ Saravanmuttu explains. ‘The greater the distance to the screen, the blurrier and greyer the shadow gets, until you no longer see it.’ But light prefers to travel in higher refractive index materials, an effect exploited by optical fibres to guide light over long distances. If the light can trigger non-linear changes in a material’s refractive index, it can compensate for any divergence, forming a waveguide. That self-trapping effect can be used to make photonic devices for applications like optical communications and medicine.

For his PhD, Kasala was studying incoherent white light propagation through a siloxane gel that contained a photoinitiator to catalyse radical polymerisation. As it polymerises, the gel increases its refractive index, making self-trapping possible. Having looked at ring patterns of light around a dark core, Kasala decided to use beams with a lower intensity “dip” in one area. Using a beam with a 124 µm wide dip rapidly forms a self-trapped ‘black beam’ in the material. 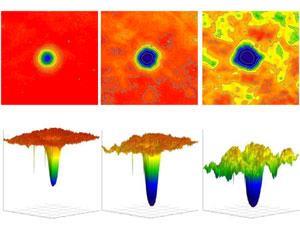 The black beam develops because the lower intensity area creates the opposite situation to an optical fibre –  a channel with a lower index than the surrounding region. ‘The rate and extent of polymerisation and therefore the change in refractive index follows the light intensity profile,’ Saravanmuttu says. ‘Once we create a slightly lower refractive index in the dip, light intensity starts funnelling outward. We get a sharper intensity gradient and the dip region gets darker, slowing down the rate of polymerisation, until it’s rendered black,’ (see video).

Mordechai Segev from Technion - Israel Institute of Technology in Haifa, Israel, who discovered the first self-trapping processes with incoherent white light, says that black incoherent self-trapped beams are a fundamental mindset-changing idea. However, he says the team’s approach ‘can be viewed both as a strength and weakness’. While it creates the beams, once the gel has polymerised ‘the index change is permanent. What remains is a linear waveguide.’ Rasbindu Mehta from Bhavnagar University in Gujarat, India, whose team demonstrated tuneable coherent light trapping, also calls the process a ‘fascinating phenomenon’. He adds that a system with reversible polymerisation might also make tuneable black beam trapping possible.

Saravanmuttu, meanwhile, says that she and Kasala have already broken such beams into filaments, creating lattices of black and light trapped beams. In this arrangement, the light channels are especially effective waveguides. ‘Simultaneously creating both bright and black self-trapped beams has not been seen before,’ she comments.