Two teams of researchers have solved a conundrum that has baffled molecular biologists for 20 years - how the enzyme responsible for ’reading’ genes can release itself from the portion of DNA to which it initially binds extremely tightly.

The process of gene expression, by which the genetic code carried on DNA is ultimately used to synthesize a protein, requires the enzyme RNA polymerase to dock onto a specific portion of DNA called the promoter region. The enzyme subsequently moves down the DNA, reading the gene and manufacturing a complementary strand of RNA. The initial association between the enzyme and the promoter is extremely stable and until now no-one was certain how the polymerase freed itself to continue its journey down the gene.

Richard Ebright of the Howard Hughes Medical Institute and Rutgers University in the US led a team which used a technique called fluorescence resonance energy transfer to observe the movement of DNA downstream from the bound enzyme. Meanwhile, researchers led by Terence Strick of the Cold Spring Harbor Laboratory in the US and the Institut Jacques Monod in France used single molecule nanomanipulation to show what happens to the DNA within the enzyme.

It has long been known that when the enzyme binds to the promoter, a certain amount of transcription takes place, with short, incomplete chains of RNA being repeatedly formed. However, the reason for this so-called abortive initiation was not understood. It does demonstrate, however, that the DNA moves relative to the enzyme while the enzyme is still anchored to the promoter. The new work shows that both the movement of DNA and the abortive initiation are crucial to the untethering of the protein. 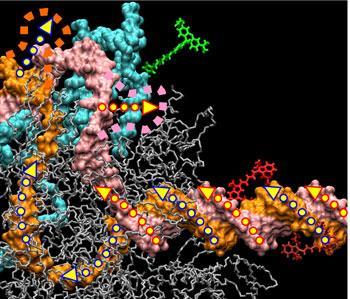 ’The enzyme remains rigidly in position, pulling downstream DNA into it,’ Strick told Chemistry World. ’The DNA becomes compressed or scrunched, like a loaded spring, and this provides the enzyme with the necessary energy to uncouple itself from the promoter - it is in effect a spring-loaded biochemical machine. And where does the energy for this scrunching process come from? The abortive initiation - the transcription of DNA to RNA - is an energy-producing reaction. This provides the energy for loading the DNA spring.’

Peter Stockley of the Astbury Centre for Structural Molecular Biology at the University of Leeds, UK said that the new work revealed some of the intricate mechanistic details of RNA polymerase and had demonstrated how the energetic cost of scrunching the DNA is related to the efficiency of transcription and hence gene expression.