Researchers in the US have designed a molecular container that can encapsulate drug molecules and increase their solubility - in one case by almost 3000 times. The new container appears to have low toxicity and can be built from readily available reagents. The finding opens the possibility of re-testing drug candidates that failed because they were insufficiently soluble or improving existing low-solubility drugs.

The team at the University of Maryland, led by Lyle Isaacs and Volker Briken, based the container on a class of compound called cucurbit[n]urils - or CB[n]. These are macrocyclic molecules made up of units of bicyclic C4H4N4O2 monomers. The n refers to the number of repeat units in the macrocycle. Many attempts have been made to capture drug molecules within these and other synthetic cages and capsules to increase drugs’ solubility, but with limited success.

The Maryland researchers’ approach was to partially construct a CB[n] but leave it open - so that instead of forming a closed ring it remained as a ’C’ shape. They then capped each end with sulfonated aromatic groups - which allowed greater interaction with aromatic guests, as well as increasing the structure’s solubility. ’Our new containers are acyclic but still pre-organised into a C-shape that is suitable for binding,’ Isaacs explains. ’Because they are acyclic they can flex like a hand and adapt to larger or smaller sized guests. This should enhance the size range of drugs that can be formulated relative to a macrocyclic container.’ 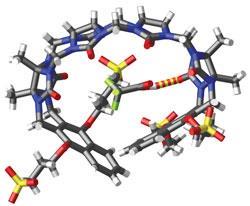 ’We now need to work with drug companies who are doing high-throughput screening of drug candidates,’ says Briken. ’There will drug candidates out there that have high bioactivity but were rejected because of low solubility. If we can improve the solubility of these candidate compounds they may be worth re-visiting.’

Oren Scherman, who researches cucurbiturils at the University of Cambridge in the UK is impressed by the study. ’This is an exciting advance in the approach of using molecular containers to bring poorly soluble drugs into highly bioactive forms. To increase the solubility of a drug molecule by a factor of almost 3000 is spectacular.’