The prospect of a ’Spider Man’ suit which would allow the wearer to scale sheer walls has moved a step closer: a carbon nanotube-based material has smashed records for sticking power to a vertical surface, and it can be easily peeled away too.

A gecko’s ability to climb walls and hang from ceilings relies on the millions of sub-microscopic branched hairs called setae on the animal’s feet - resulting in powerful van der Waals forces being generated between the setae and the surface. Over the last six years, researchers have created a range of synthetic mimics of this system. 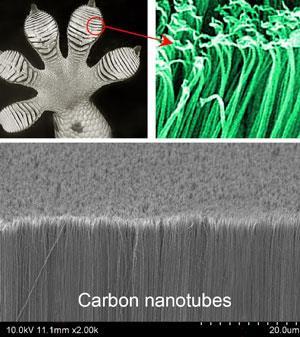 Now, Liangti Qu from the University of Dayton, Ohio, US, and colleagues have synthesised a new material, based on multi-walled carbon nanotubes, that sticks onto a smooth vertical surface with adhesive forces of around 100 Ncm-2 - almost 10 times more than a gecko’s foot, and nearly three times greater than the best artificial ’gecko’ material. ’A three centimetre square of the material could hold 150 kg,’ says Liming Dai, one of the leaders of the research group. Yet the material can also easily be pulled away from a surface.

The key to the new material’s properties lies in the structure of its nanotubes. They are grown under low pressure chemical vapour deposition in such a way that the exposed ends of the tubes are not aligned; rather they are floppy and entangled, like so many strands of spaghetti.

When a patch of the material is pressed on to a vertical surface and a load attached to pull it downwards, the strands of ’spaghetti’ are stretched so that they are aligned against the surface, significantly increasing the area of contact between the hairs and the substrate. But without the shear force downwards, the nanotubes have far less sticking power. When tugged in the normal plane (perpendicular to the vertical surface), they can be easily detached from the wall.

The material showed reduced, but still significant, adhesion on rough surfaces such as sandpaper. Possible applications, says Dai, include pads for a robot’s feet to enable it to climb walls, or as a way of joining electronic components without the need for soldering. He says the modified nanotubes are no more expensive to produce than standard nanotubes, and that the price of these is falling as more industrial-scale production facilities emerge.

Stanislav Gorb of the Max-Planck Institute for Metals Research in Stuttgart, Germany, is an expert on biomaterials. He says that while he likes the study because of the way that carbon nanotubes have been modified to achieve novel properties, the system is not truly analogous to that of the gecko because a relatively large ’preload’ is needed to obtain the adhesion: in other words, the patch of material must first be pressed with some force to the surface. ’The trick of the gecko and other animals is minimal load with strong adhesion,’ Gorb points out.