Graphene racks up the charge

Atomically-thin sheets of carbon could improve the performance of ultracapacitors

Researchers in the US have used graphene, sheets of carbon that are just one atom thick, to improve the performance of energy-storage devices which could supersede batteries in electric cars.

Rod Ruoff and colleagues at the University of Texas at Austin say the vast surface area of graphene can be exploited to store greater amounts of charge in an ultracapacitor - a device that combines the advantages of a capacitor and a battery.1

Batteries store and release chemical energy slowly and are apt to degrade over time - but they can pack in huge amounts of charge. Traditional capacitors, meanwhile, soak up and release electrical charge in rapid bursts - useful when starting power-hungry engines - but can’t store much of it. Ultracapacitors have a storage capacity many thousands of times greater than conventional capacitors, though they need to improve still further to rival battery storage.

’If we could get the energy density of an ultracapacitor to the level of a lead acid battery this would be a massive step forward - and maybe graphene could do this,’ says Ruoff. 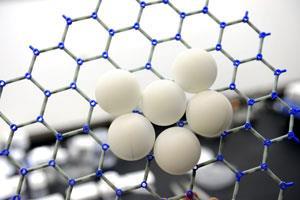 A model of charged graphene with oppositely charged ions (represented by ping pong balls), which occurs in an ultracapacitor

Ultracapacitors work by suspending electrodes with high surface area - such as highly porous carbon - in an electrolyte. When the electrode is charged with ions or electrons, the electrolyte polarises so that oppositely-charged ions nestle against the electrode surface, producing a highly dense electrical charge within the electrode.

’Because graphene has such a high surface area, if all of it were available to polarise the electrolyte the amount of charge we could dump on it would be very high,’ says Ruoff. The researchers used a previously developed technique to make chemically modified sheets of graphene - starting with graphite oxide, shaving it into thin strips, and then chemically reducing the oxide to create carbon sheets one atom thick possessing a small amount of oxygen, hydrogen and nitrogen. The flexible sheets are then mixed with an electrolyte such as potassium hydroxide. They wrap themselves around the electrolyte, forming a close association.

In this way the US team made an ultracapacitor that could store 135 farads per gram of material, comparable to good current ultracapacitors. Ruoff says theoretical predictions suggest graphene’s ability to store electrical charge could be about double that of current commercially used materials.

There has been a flurry of interest recently in the use of carbon nanotubes as electrode materials for ultracapacitors, but Ruoff believes that graphene could have the edge over these materials. ’With nanotubes much of the inner surface area can remain inaccessible to the electrolyte,’ he says.

One recent exotic example of an ultracapacitor based on carbon nanotubes has been described by researchers in China, who attached highly porous clumps of manganese oxide ions onto stalks of carbon nanotubes protruding from a metal foil. The high porosity of the manganese oxide allows it to harbour a high density of ions, enabling the structure to hold around twice as much charge as conventional ultracapacitors.2

Mike Barnes, who works with ultracapacitors at the University of Manchester in the UK, is impressed by Ruoff’s modified graphene device. ’The system they are using seems to give very competitive results even at this early stage of the research process,’ he comments.