Chemists in Israel have developed a new way to oxidise primary alcohols to carboxylic acids, using water as both the reaction solvent and the source of oxygen. The method could result in a cleaner and safer way to generate carboxylic acids and their derivatives, which are important compounds for the chemical industry.

‘For the most part, carboxylic acids are made by using stoichiometric amounts of oxidising agents, such as permanganate, which give stoichiometric amounts of waste,’ says David Milstein of the Weizmann Institute of Science, who led the research team. ‘There are recent procedures using oxygen under pressure, but this introduces potential safety issues. We have developed something conceptually new, using water as the source of oxygen with the liberation of hydrogen gas.’

The key to the method is the use of a ruthenium catalyst, a so-called pincer complex in which a ruthenium centre is clamped by a bipyridine-based claw. In the presence of a base, the catalyst interacts with water and the alcohol substrate, transferring the water’s oxygen to the alcohol and releasing hydrogen. The oxidised alcohol becomes trapped by the base to form the carboxylic acid salt, which can be isolated and, if needed, simply converted into the acid. 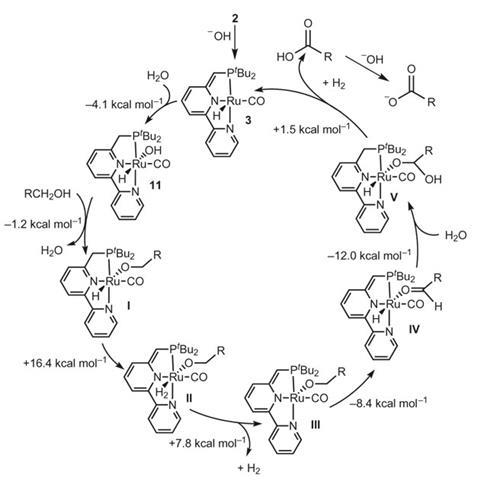 A proposed mechanism for the reaction

The team succeeded in oxidising a wide range of primary alcohols in this way, with carboxylic acid yields ranging from around 60–90%. The catalyst loading used for the experiments was 0.2 mol%, so 500 molecules of product are obtained for every molecule of catalyst. ‘We think we can improve on this,’ says Milstein. ‘I think it is a procedure that can be upscaled and the hydrogen that is generated is a useful by-product.’ The cost of ruthenium is a potential issue, Milstein concedes, ‘although it is the least expensive of its class of noble metals’. The team is working to see if it might be possible to replicate the reaction with an iron-based catalyst.

Roger Sheldon of Delft University of Technology in the Netherlands, an expert on green catalytic oxidation, says that the use of water as both the solvent and the sole source of oxygen in the catalytic oxidation of primary alcohols to carboxylic acids and hydrogen is ‘an important and exciting discovery’. Sheldon adds: ‘The broad scope and relatively low catalyst loading coupled with good catalyst stability under the anaerobic conditions are additional advantages. The method could find industrial applications in fine chemicals and pharmaceuticals but in bulk chemicals the formation of one equivalent of salt as a co-product is an obvious drawback.’