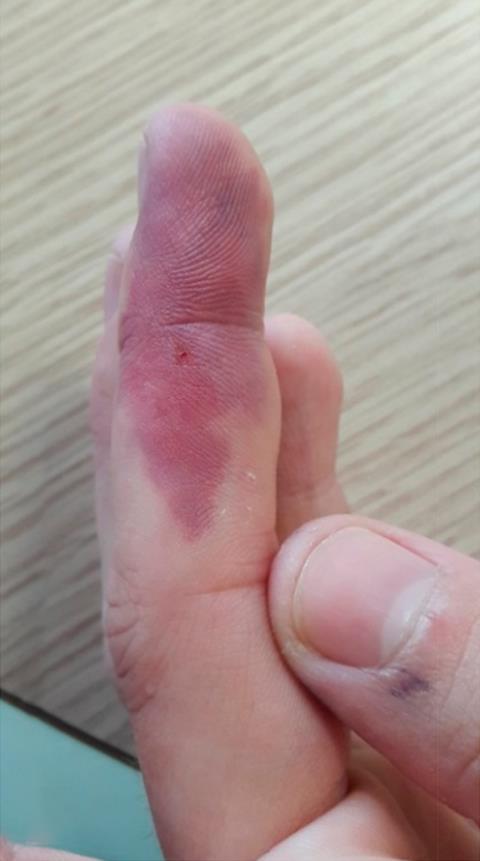 After a horrific accident involving the routine transfer of a solvent, a French researcher has been raising awareness about the danger of sharp needles in the lab. He is now calling for alternatives to needles to be developed for the transfer of solvents or reagents to make labs safer.1

In June 2018, Nicolas, a 22 year-old student, was working in Sebastien Vidal’s lab at the University of Lyon 1. He emptied a syringe containing dichloromethane (DCM) into a flask, but then accidentally pricked his finger with it. Vidal estimates about two drops, or less than 100μl of DCM, was left in the needle and that this entered the finger.

A series of graphic photographs shows what happened next – the journal article is accompanied by a warning that some may find the images (reproduced below) disturbing. Following the needlestick injury, it took around 15 minutes for a purple discoloration to spread over Nicolas’ finger. After two hours, the edges of the purple patch were turning black, indicating necrosis – cell death – was beginning. At this point, Nicholas complained that the finger felt very hot and hard to move.

Nicolas required an emergency operation to save his finger. The surgeon, who initially had thought he would have to amputate, managed to remove the dead flesh from around the puncture wound, and used a skin graft from Nicolas’ arm to reconstruct the finger. The surgeon later recounted that he had never seen such an injury in his 25 years in an emergency hospital department.

Nicolas’s finger is now almost back to normal, although his guitar-playing has suffered as the necrosis damaged the nerve, leaving him with reduced power and dexterity.

DCM is one of the most common organic solvents used in synthetic chemistry labs. Information on DCM injuries and its material safety data sheet (MSDS) provide details about eye contact, skin contact, ingestion and inhalation, but not injection, Vidal points out. On investigation, Vidal found that a similar incident occurred in Thailand, although this man voluntarily injected himself with 2ml of DCM, with the consequences reported by a Bangkok hospital.2

Vidal believes that these cases show that the MSDS documents should be amended to contain information relating to injections. ‘But I was told by our university safety officer that modifying a MSDS document takes ages and lots of data need to be collected.’ These include detailed animal studies that reproduce the accident, an analysis of tissue damage and a medical evaluation. 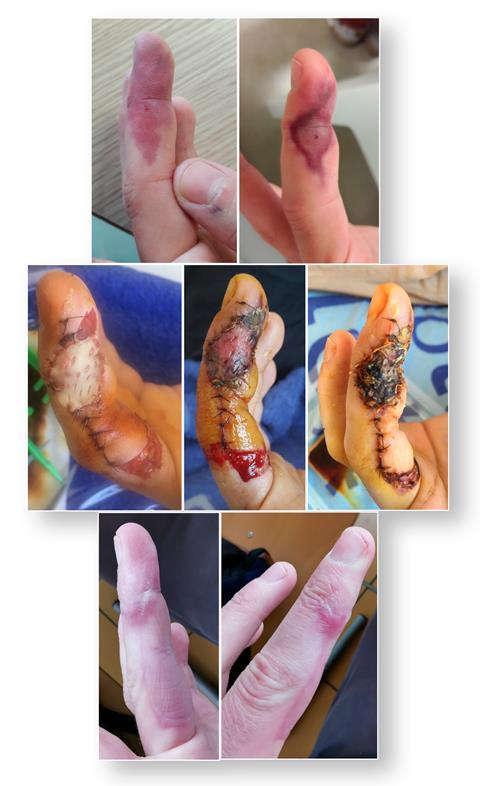 The student’s finger at various stages after the accidental injection of a small amount of dichloromethane. Left to right, 10–15 minutes after the injury, then 2 hours, 24 hours (after surgery), 2 days, 5 days and 1 year later (both bottom images)

Given the lack of information on injection of DCM, Vidal wants this story to be told far and wide. And the feedback has been positive. ‘This document has been circulated [widely],’ he says. ‘Safety officers from universities in Canada, the US and France have told me that they will include this story in their training programme. People appreciate that we shared this story. So many would have not talked about it, afraid of bad publicity [for their institution], but our institutions were very supportive from the beginning and still are.’

Vidal would also like the scientific community and chemical suppliers to develop safer protocols and alternative equipment for routine procedures such as chemical transfer. One idea is to use ‘flat-ended’ needles to avoid puncture wounds. ‘These are available now but we typically use sharp-ended needles in organic chemistry because we need to inject a solvent through a rubber stopper preserving our reaction vessel from outside air/moisture. The “flat-end” needles cannot go through a rubber stopper. The question is not an easy one, but maybe this accident will lead to some bright ideas.’

Alaine Martin, health and safety manager at Strathclyde University’s department of chemistry, says she has never seen anything like this accident. ‘Using a syringe with needles is very normal in labs, but if accuracy is paramount, then perhaps using a micropipette might be a safer option.’ It’s all down to training, she adds, such as choosing tips and using pipettes correctly. ‘Are our students being taught the correct way to use needles, and how to sheath and unsheath them?’ she asks. ‘Has anyone thought what else could be used? Possibly not.’