Homing in on a cheaper Haber-Bosch process

A cheaper alternative to the Haber-Bosch process could have moved a step closer thanks to a new ruthenium-based catalyst complex developed by chemists in Germany.

Each year the Haber-Bosch process produces millions of tonnes of ammonia for the fertiliser industry by direct hydrogenation of nitrogen with hydrogen gas over a catalyst. However, this process needs temperatures of around 450?C and pressures of 300 bar, consuming vast amounts of energy. 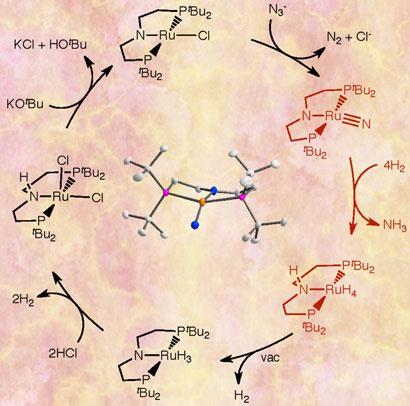 Now, a team led by Sven Schneider at the University of Erlangen-N?rnberg and Max Holthausen at the University of Frankfurt have shown how a ruthenium complex with a nitrogen-metal triple-bond can split molecular hydrogen to produce high yields of ammonia at atmospheric pressure and temperatures of only around 50?C. The finding could point the way to solving the ’second half’ of the Haber-Bosch process, the activation of hydrogen and hydrogenation of a nitrogen atom to create ammonia.

The German researchers synthesised a planar molecule with a ruthenium centre clamped by a nitrogen and two bulky flanking phosphine groups - known as a PNP pincer ligand. A nitrido ligand triply bonded to the ruthenium can then be introduced with an azide. This ligand combine with the hydrogen to form ammonia.

The mechanism of H-H bond cleavage that the team proposes has the first hydrogen atom moving to the nitrogen of the pincer with the other remaining on the ruthenium. This latter hydrogen is then transferred to the terminal nitrido ligand. This reaction repeats twice more to produce ammonia.

’A key aspect of the system is the cooperative nature of the metal-pincer ligand fragment,’ says Schneider. ’Both the transition metal centre and the ligand are crucial for the reaction to proceed. We have essentially modelled the second half of a Haber-Bosch type hydrogenation of nitrogen in solution.’ The next step is to try to find a way of splitting dinitrogen to obtain the single nitrogen attached to the ruthenium complex.

Commenting on the work, Christopher Cummins, an expert in nitrogen chemistry at the Massachusetts Institute of Technology in the US, says: ’This work gives a clear demonstration of nitride ligand hydrogenolysis yielding ammonia. Now, if a nitride ligand with such reactivity could be obtained via N2 splitting then a homogeneous analogue of the Haber-Bosch ammonia synthesis would be at hand. The authors’ choice of robust pincer ancillary ligands to support the hydrogenolysis reactivity is probably crucial.’