A crack team of international chemists has captured and caught on camera a small, elusive molecule that has previously never been seen. But when the researchers returned the next day their prize catch had disappeared despite having been trapped in a formidable ’energy cage’ that would have required impossibly large amounts of energy to breach.

The Houdini-like feat was achieved through a trick of quantum mechanics, and the finding could have important implications for a wide range of other chemical reactions.

Hydroxymethylene, H-C-OH, is a short-lived carbene, in which the carbon has only two bonds instead of four, making it highly reactive. Some scientists believe it could play an important role in extraterrestrial chemistry, participating in the formation of small sugar molecules. ’This is a compound which has never been made before, which is unusual for a four-atom molecule,’ says Peter Schreiner of Justus Liebig University in Germany, who led the research [1], together with colleagues from the University of Georgia in the US and Eötvös University in Budapest.

The researchers made hydroxymethylene by heating glyoxylic acid and sending the resulting hydroxymethylene immediately into a block of frozen argon at a temperature of 10K. ’To see if our molecule was trapped in the argon we shone infrared and ultraviolet light and obtained the spectra,’ says Schreiner. ’Because no-one had seen it before, we carried out high level computational studies to obtain a predicted spectrum and we got a perfect match.’ 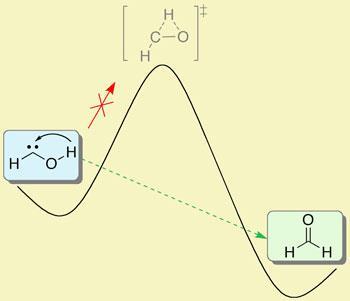 Hydroxymethylene cannot overcome the large energy barrier for thermal rearrangement to formaldehyde. Instead it tunnels quantum mechanically through the barrier, independent of energy from the environment

Having successfully trapped the molecule in an environment with virtually no thermal energy available to allow the hydroxymethylene to rearrange itself into a more energetically favourable configuration, the researchers went home. ’But when we came back next day it had gone,’ says Schreiner. It had been replaced by formaldehyde. That was baffling because initial calculations had suggested that there was insufficient energy in the system to allow the molecule to break free from its incarceration.

’There is no way it could have climbed the enormous energy barrier,’ says Schreiner. Instead, what had happened was that one of the hydrogens had adopted a wave-like persona and had ’tunnelled’ through the energy barrier, moving from the oxygen to the carbon to produce formaldehyde. Theoretical calculations that take into account this tunnelling phenomenon give hydroxymethylene a half life of just about two hours - which is what the team observed.

’One implication of our finding is that if hydroxymethylene does form in space it would not persist for long enough to take part in reactions to make sugars,’ says Schreiner. ’The other important thing is that this finding could have implications for general hydrogen transfer reactions which occur widely in nature in any reductive process. We might have to revise our thinking of what can be overcome in terms of energy barriers.’

Commenting on the work [2], Marku Räsänan of the University of Helsinki says that the findings could ’cast fresh light on the chemistry of these fascinating compounds and could even lead to the discovery of new reactions. The findings also provide a well-defined system of small molecules that will be a perfect model for studying the mechanisms of tunnelling reactions in solids'.