How HIV gives antibodies the slip

New research helps explain why antibodies designed to disarm HIV don’t work unless they hit their target spot on.

The study shows that an antibody can be rendered useless if it is off target by just an atom’s width, providing an insight into the difficulties faced by vaccine designers.

HIV is well known for its ability to give antibodies the slip - only a handful show any useful degree of activity against the virus. Among those is counted the rare b12 antibody, which offers some degree of protection in people whose immune systems produce it naturally. Much HIV vaccine research is focused on the site that b12 binds to a glycoprotein (gp120) on the viral spike that enables it to enter immune cells.

In the new study, US researchers analysed crystal structures of b12 and other 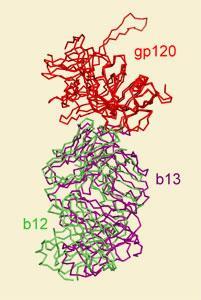 less effective antibodies, in complex with the glycoprotein itself, to show how subtle shifts in targeting can make the difference between those that neutralise and those that do not. According to Gary Nabel, one of the authors based at the National Institutes of Health’s Vaccine Research Center in Bethesda, Maryland, the binding interactions are virtually the same. ’What we can see in the structural studies is that in the case of one antibody in particular, it’s slightly shifted from the way b12 binds,’ he says. ’It’s down a couple of ?ngstr?ms and the angle is slightly different.’

Crucially, this slight mistargeting leads to the non-neutralising antibodies being unable to recognise the form that the glycoprotein takes in HIV - unlike the single free protein in the crystal structures, the gp120 displayed by the virus is trimeric. Free monomeric g120 is shed during infection and, in fact, acts as a decoy for non-neutralising antibodies. Nabel says the window of opportunity that his study provides is in enabling researchers to model what is important in the trimer in order to find the angle of approach an antibody would need to recognise and neutralise it.

’Without this information it would be like trying to find the control switch on the television set with the lights off,’ says Nabel. ’You could probably get there if you know the room well enough in the dark, but when the lights are on you can go where you need to go without any hesitation.’

Chris Scanlan, who is involved in HIV vaccine design at the University of Oxford, UK, says the study is a significant step. ’It’s very interesting for us working in the field because it tells how not to design a vaccine,’ he says. ’It tells us it’s no good targeting monomers where you’ve just changed the residues, because all that’s going to happen is you’re going to get more of these non-neutralising antibodies and not the good ones like the b12 antibodies.’