How to catch an insulin-doping athlete

A growing number of athletes reportedly take insulin to boost their performance illegally, but controlling insulin abuse has gone largely unchecked. Now, a urine test designed by German and Belgian scientists could be set to change all that.

Although it is unclear whether or not shooting up with insulin improves athletic performance, the International Olympic Committee banned the use of this hormone by non-diabetic athletes in 1998. But a test to catch insulin dopers does not exist.

’So far no doping control assay is able to differentiate synthetic insulins from endogenously produced insulin,’ explained Mario Thevis, a biochemist at the German Sport University in Cologne. ’In order to prevent athletes from administering this drug, a reliable and sensitive method is necessary,’ he said. Thevis and colleagues have now reported such a test in the journal Analytical Chemistry.

Thevis’ team purified degradation products of natural and synthetic insulin from the urine of healthy volunteers or patients and athletes being treated for diabetes mellitus.

’Therapeutics are commonly monitored in blood and the metabolic fate of these drugs in urine was considered negligible,’ explained Thevis. ’Now, modern analytical instruments have allowed for the detection of low-level compounds and metabolites.’ For instance, ’the amino acid compositions are different in human insulin and most synthetic analogues,’ he said, ’this factor can be determined using mass spectrometry.’ 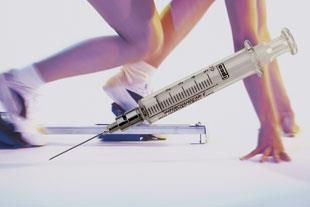 The test unambiguously discriminates metabolites of Lantus insulin, a long acting synthetic insulin, from human insulin based on modifications introduced by pharmaceutical companies, said Thevis. It is currently being assessed for use in future drug tests by the World Anti-Doping Agency.

’It is clear that a lot of good work has been achieved,’ Olivier Rabin, director of science at the World Anti-Doping Agency in Montreal, Canada told Chemistry World. ’We would want to apply this method to maximise our chances of catching cheaters,’ he added.

Although the researchers validated the test for one type of synthetic insulin, the method did not work for the urine samples from the diabetic patients treated with recombinant human insulin or Levemir, two other commercially available long acting insulins.

’The discrimination is more complex as the molecules [natural and recombinant human insulin] are identical,’ explained Thevis.

However, the researchers found that when they compared the ratio of a degradation product of the synthetic insulins to endogenous insulin, the ratio was elevated in diabetic patients treated with either recombinant human insulin of Levemir. Thevis says that a ratio profile is a ’promising approach’ for identifying the misuse of these types of insulin that his team is currently pursuing.

Insulin, when used as a performance enhancer, works to slow down the degradation of muscle tissue, which is attractive to such athletes as bodybuilders especially when they are also doping with a growth hormone. For endurance athletes, cyclists and runners, for example, insulin provides fuel for muscle cells and improves stamina. Although the prevalence of insulin doping is not known, luggage seizures at airports and testimonials from formerly doped athletes suggest that the abuse of this hormone is a real problem.

’We know insulin abuse is part of the doping regimen of some athletes,’ said Rabin.