Burn dressing created that simply washes off, rather than having to be cut away could mean less pain for patients

A hydrogel-based dressing that sticks to wounds but can be painlessly washed away could help burns victims make a faster and less traumatic recovery, say the US-based scientists behind the new material. 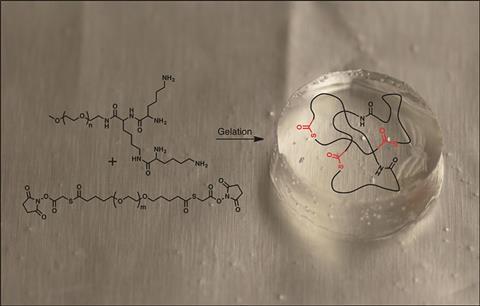 In recent years, various new polymer and hydrogel-based materials have been used to make more advanced wound dressings – some of these can stick better to tissues, deliver drugs or monitor healing. But with large open wounds like severe burns, removing any kind of dressing can be traumatic for the patient, as some of the healed tissue must be scraped or cut away.

‘It is known that secondary to the burn injury, burn dressing changes are reported to be the time of most pain as it involves mechanical debridement and cutting to remove the dressing,’ says Mark Grinstaff of Boston University, whose team set out to develop a dressing that was painless to remove, but still capable of performing all the functions of those that are currently available.

Their dressing is made by mixing two components at the point of application: a lysine-based dendron and a polyethylene glycol cross-linker, which react to form a clear, flexible hydrogel. ‘It absorbs wound fluid, maintains a high level of humidity at the wound site … and protects against bacterial infection,’ says Grinstaff. When it is time to change or remove the dressing, the hydrogel can be dissolved away by applying an aqueous solution of cysteine methyl ester.

‘The mechanism behind the dissolution is a thiol–thioester exchange reaction, where the thiol of the [cysteine] amino acid reacts with the thiol–ester linkage in the hydrogel,’ explains Grinstaff. He adds that this is the first example of a dissolvable hydrogel dressing for the treatment of burns.

The team tested dressings made from the hydrogel on rats with second degree burns, and showed they provided an effective barrier to bacteria, and could be safely washed away when needed. Further tests to establish the material’s safety are ongoing. ‘Our goal is to have this medical device in the clinic in two years,’ says Grinstaff.

Giuseppe Tronci, who designs novel materials for healthcare at the University of Leeds, UK, agrees the applications of the new dressing are potentially very useful. ‘The possibility to form and dissolve the hydrogel dressing in situ is certainly beneficial from a clinical perspective,’ he says. ‘Preclinical evaluation of the material is the next step towards the translation into the clinic, [for example] looking at wound healing and clinic-friendly hydrogel dissolution times.’