Scientists in the US have developed a hydrogel-based wound sealant that can be easily applied to stem severe bleeding then gently and precisely removed to allow surgery.

On the 3 October 1993, Corporal James Smith, a 21-year-old US army ranger on operations in Mogadishu, bled to death from a gunshot wound to his thigh and pelvis. You might already know the story of that night, recounted in Mark Bowden’s book Black hawk down. The harrowing story of Smith’s death highlights how difficult it can be for a medic to control internal bleeding before it’s too late – especially if they are pinned down at night by enemy fire, hours from surgical help. Even far from the battlefield, haemorrhage is a serious threat to anyone with a severe wound. Each year, it kills more Americans than those who died in the entire Vietnam war.

Now, a new material could both save lives and reduce pain by combatting problems that are ignored by current wound treatments. Boston University’s Mark Grinstaff, who led the work, explains that the market for wound sealants has two critical gaps. First, conventional dressings can be difficult to apply. ‘Imagine trying to pack a pre-formed piece of gauze inside a wound to your groin or neck,’ he says. Second, current wound sealants only focus on reducing blood loss, ‘but what happens when a patient reaches hospital?’ asks Grinstaff. ‘These sealants can’t easily be removed.’ After irreversibly bonding to the wound, the sealant needs to be cut out, causing yet more tissue damage. The already injured patient is further traumatised. 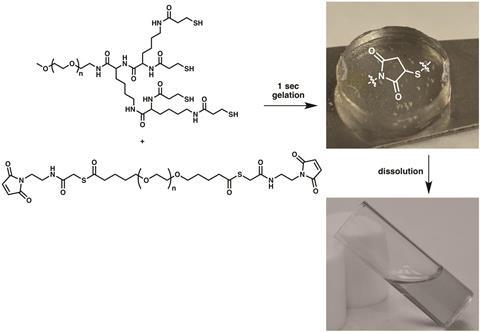 Grinstaff’s laboratory’s solution combines dendrons with cross-linking molecules. When mixed together, these two components react to form a flexible, thioester-linked hydrogel. Grinstaff explains that the material can be sprayed onto a wound. ‘It gels within one second, forming a soft, clear bandage that sticks to tissue,’ significantly reducing blood loss.

The bandage can later be removed by adding a solution containing cysteine methyl ester, which dissolves the hydrogel via a thiol–thioester exchange reaction. Unlike the mechanical cutting currently necessary for sealant removal, Grinstaff’s chemistry-based approach avoids tissue damage and could offer surgeons fine control when re-exposing injuries, simplifying operations.

So far, the efficacy of the material has only been shown in small animals with easily accessible wounds. However, Phillip Messersmith, an expert in biological adhesives at the University of California, Berkeley, US, recognises the importance of Grinstaff’s work. ‘A haemostatic sealant that can be dissolved on demand is really a creative development, with important clinical implications for reconstructive surgery,’ he says.