Researchers have demonstrated for the first time that atomic force microscopy can be used to reveal the chemical identity of individual atoms on a surface at room temperature. The finding could pave the way for the technique to be used routinely as a tool of chemical identification at the atomic scale, as it can pick out specific atoms from a complex mixture of elements.

Atomic force microscopy (AFM) works by scanning a sharp tip over a surface, rather like the needle of a record player moving over the grooves of a vinyl LP. In its ’dynamic mode’, the tip is attached to a wobbling arm - as the tip interacts with surface atoms, the arm wobbles at a different rate that depends on the distance between the atom and the tip. These variations can be turned into an atomic-scale map of the surface. 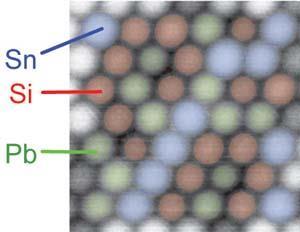 Atomic force microscopy can distinguish between atoms of tin, silicon and lead

However, until now it has been very difficult to chemically identify the individual atoms seen on a surface. A team led by Oscar Custance from Osaka University in Japan has now shown how it can be done.1 The researchers used AFM to probe the surface of an alloy of silicon, lead and tin, with known concentrations of each element. By making repeated and highly accurate measurements they showed that the forces between the tip and each element were subtly different, the interaction with silicon being consistently the strongest.

They also noticed that the magnitude of these forces varied from experiment to experiment, because the precise composition of the tip is impossible to control. Nevertheless, the ratio of the forces of the interaction between each element remained constant regardless of the composition and structure of the microscope’s tip. Supported by some complex theoretical modelling, the research team showed that in this way it was possible to obtain a ’fingerprint’ of each element. They confirmed this by probing an alloy of the three elements with the atoms in unknown positions and at unknown concentrations. They successfully identified atoms of each of the three species.

Alexander Shluger of University College London, co-author of a commentary on the research,2 told Chemistry World that the work represented ’a very significant advance’.

’In terms of the instrumentation alone it is a huge achievement,’ he said. ’It is necessary to come back to the same atom many times and keep the microscope focused on the same point within an accuracy of 0.5 ?ngstroms. They did it at room temperature, which is unique, and they looked at a complicated system of an alloy of three species that was disordered. This is an extremely important aspect of the work and is something that is difficult to achieve.’

The next step, said Shluger, would be to attempt to show that the principle is applicable more widely, beyond the three elements used by the Osaka team. If it could also be applied to electrically-insulating surfaces, the system could eventually evolve into an analytical tool to routinely identify individual surface atoms.