Structure-function analysis will help to tackle the growing problem of insecticide resistance.

A rapid, flexible way to make variants of potent insecticide molecules known as spinosyns could help to combat the growing problem of insect resistance, according to German chemists.

The spinosyns are a group of natural products produced by the bacterium Saccharopolyspora spinosa. The bugs were first discovered in soil around an abandoned rum distillery in the Caribbean in 1982, and since then they have been cultured in fermentation broths to generate a range of spinosyns for agriculture. The compounds attack insects’ nervous systems by targeting two key neurotransmitter receptors, but are increasingly facing the threat of insect populations becoming resistant to them.

As the total synthesis of spinosyns cannot be easily modified to produce new variants of these insecticides, Lutz Tietze and his co-workers at the University of G?ttingen, Germany, have developed a different route. The spinosyn family all have four connected rings of carbon atoms at their core, and previous research has found that only the central two rings (marked B and C in the structure, below) are essential for their insecticidal activity. 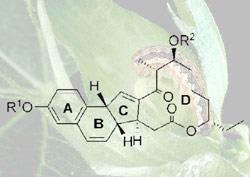 The simplified spinosyn analogues could spell doom for voracious pests

So the team simplified the molecule, and its synthesis, by replacing the
A-ring of spinosyn with a benzene unit. This allowed the scientists to use two Heck reactions, catalysed by palladium metal, to reliably stitch the carbon atoms of the rings together.

’We employed a two-fold Pd-catalysed reaction, which allowed us to construct the core of the spinosyn analogues in one process with the correct stereochemistry and the right positions of the double bonds,’ said Tietze.

The researchers are now hoping to generate a whole family of new compounds by varying the nature of their substitute benzene ring, which could then be screened to find the most efficient and useful insecticides to replace the original spinosyns.

Cabbages are about to be saved from caterpillar attack thanks to an insecticide under development in the US.

Cinnamon oil extract may control the spread of malaria.

A pheromone a day keeps the midges away

Chemical ecologists have taken a key step towards understanding the sex life of a notorious insect pest. The discovery spells good news for apple growers.