Scientists in Poland and the US have reformulated the herbicide dicamba to reduce its environmental impact. 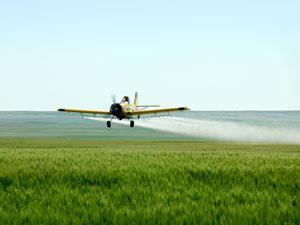 The use of chemicals in agriculture is widespread, however, there are increasing concerns about their other environmental effects. Dicamba, used to control broadleaf weeds in grain fields and grasslands, is known to enter the environment via water runoff and evaporation following its application.

In an attempt to reduce its volatility, a team led by Robin Rogers, from the University of Alabama, and Juliusz Pernak, from Poznan University of Technology, has formulated dicamba as an ionic liquid. Ionic liquids are liquid salts, consisting of a cation and an anion. Deprotonated dicamba assumed the role of anion and the team tested different cations to see which combination was most effective.

The team formulated 28 new dicamba ionic liquids using hydrophobic cations that had surfactant or antimicrobial activities. ‘We have always thought of ionic liquids as dual-acting; that is, one can combine an active ingredient in both ions into a single salt,’ explains Rogers. By forming a hydrophobic ionic liquid, the water solubility of the herbicide was reduced. The new ionic liquids showed lower volatility, increased thermal stability and improved efficacy in field tests over the parent dicamba. ‘Not only are the ionic liquid forms desirable because of the potential for lower environmental impact, they actually work better, leading to lower application rates of the chemicals,’ Rogers adds.

Bill Johnson from Purdue University, Indiana, US, an expert in the development of weed management systems, comments that ‘if a less volatile form of the herbicide can still provide the same level of weed control, the concerns about off-site movement will be greatly reduced.’ He also says that this approach could be taken with other weak acid herbicides, such as 2,4-D (2,4-dichlorophenoxyacetic acid).

The next step for Rogers and co-workers is to investigate other cations with the dicamba anion to create a herbicide with other useful properties.