Research flags DNA gyrase as a new target for pesticides

Scientists in Australia and the UK have found the first new herbicidal mode of action in over 20 years by modifying the antibiotic ciprofloxacin. They successfully synthesised a ciprofloxacin analogue that selectively targets an enzyme required for plant growth, yet has decreased antibacterial activity.

The overwhelming success of glyphosate as a herbicide originally reduced demand for research in this area. However, ‘glyphosate is now susceptible to resistance in many different plants, so there is a substantial amount of concern,’ explains Peter Andreana, an expert in small molecule synthesis and drug design from the University of Toledo, US, who was not involved in this study.

Joshua Mylne and Keith Stubbs, from the University of Western Australia, and their colleagues, target DNA gyrase in their new system. DNA gyrase is a type of enzyme that helps control DNA unwinding during replication. It is essential for plant growth but not present in humans, and therefore a prime herbicidal target.

The team already knew that ciprofloxacin could inhibit DNA gyrase. But since ciprofloxacin is also an antibiotic, using it in agriculture would contribute to growing antibiotic resistance problems. With this in mind, the team decided to develop analogues of ciprofloxacin with reduced antibacterial activity and test them as herbicides against Arabidopsis thaliana, a common model plant. To do this, they produced a basic fluoroquinolone scaffold then added chemical moieties differing in size, shape and hydrophobicity at the N-1 and C-7 positions. They found an analogue with sufficiently decreased antibacterial and increased herbicidal properties, which confirmed that targeting DNA gyrase was a realistic new mode of action for herbicides. 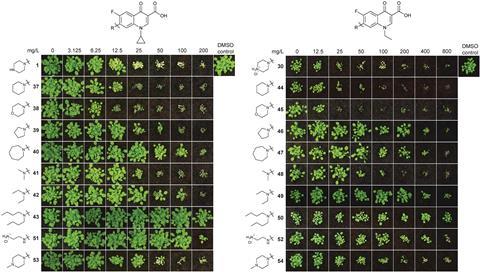 Despite the reduced antibiotic abilities of the compounds, some scientists are still concerned about the idea of modifying antibiotics for use in agriculture, and the precedent that this will set for future research. ‘Antibiotic susceptibility is our most endangered medical resource,’ explains Jack Heinemann, an expert in antibiotic resistance and genetic engineering at the University of Canterbury, New Zealand. ‘Having some is like having none.’ He goes on to explain his sadness that ‘we are pushing both our medical and food systems to such extremes that we have to threaten one to temporarily relieve stress on the other’.

‘Our study is not saying that people should start putting ciprofloxacin directly onto their weeds … if you do that, you will be contributing to antimicrobial resistance,’ Stubbs replies. ‘We have shown that this [inhibition of plant DNA gyrase] is possible, which is really cool, but huge amounts of work will be necessary to achieve it completely. Most likely with compounds that look nothing like ciprofloxacin and may not even work in the same way.’

The team plan to extend their study by evaluating different types of fluoroquinolones that act in a similar manner, and tweaking these structures accordingly to see if they can get similar results. ‘I look forward to further understanding their ideas about the mechanism,’ adds Andreana. ‘This is going to be extremely important. There might be things that we learn from their mechanism, not only involving inhibition but even metabolism, and this will allow scientists to come up with more targets.’