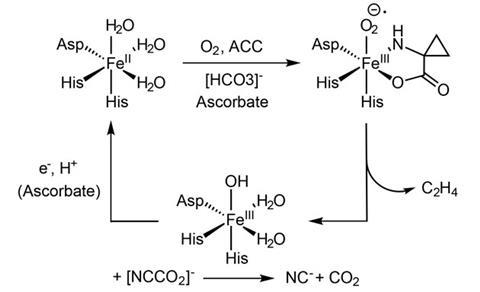 Researchers have for the first time isolated the fragile and elusive cyanoformate ion, and in doing so have not only opened up new avenues in the search for energetically efficient ways to capture carbon dioxide, but may have also solved a mystery that has baffled plant biochemists for decades.

An extensive global research effort has been underway in recent years to find ways of trapping carbon dioxide in a bid to stem greenhouse gas emissions. A key requirement is that the carbon dioxide binds only weakly to a sorbent so that this can be recycled at little cost.

A team led by Jason Clyburne of St Mary’s University in Halifax, Canada, and Heikki Tuononen of the University of Jyväskylä in Finland, were investigating weakly bonded carbon dioxide compounds. ‘Cyanoformate came out as one of these,’ says Clyburne. ‘Its existence had been speculated on for years, but it had never been detected. We found a lot of references to it in the context of ethylene formation in plants.’

Ethylene is a key plant hormone whose biosynthesis produces cyanide and carbon dioxide as by-products. It has remained a puzzle why the cyanide does not instantly poison the iron-containing active site of the enzyme that catalyses ethylene’s production. It has been speculated that the cyanide and carbon dioxide react to create the cyanoformate anion, [NCCO2]-, which subsequently decomposes away from the active site, but this ion has never been detected. It is inherently highly unstable because the carbon dioxide needs to be bent into a highly strained configuration.

Computer-based calculations for the association of carbon dioxide and cyanide suggested that a stable albeit fragile anion could exist. ‘So we set out to isolate it,’ says Clyburne. ‘We used a trick which inorganic chemists often deploy by stabilising reactive species with a bulky ion,’ – in this case the tetraphenylphosphonium cation. When the team exposed a concentrated solution of [PPH4]CN in a non-polar ionic liquid solvent to carbon dioxide, within a few minutes crystals of cyanoformate formed at the bottom of the flask.

‘The active site of an enzyme is very different to that of the bulk cell, and in many respects is almost like a vacuum,’ says Clyburne. ‘This environment could allow the CO2 and cyanide produced during ethylene synthesis to associate as cyanoformate. So the cyanide is cloaked by the CO2 and smuggled away from the sensitive iron centre in the active site before it reaches increasingly polar solutions in the cell’s cytosol and decomposes.’

The finding also suggests that solvent effects could open the way to finding other weakly-bound carbon dioxide complexes that may be useful for carbon capture technologies. ‘Clearly for carbon capture on a large scale, cyanide would not be feasible,’ says Clyburne. ‘But we might be able to design other molecules in appropriate solvents that can gently caress CO2 into reacting – a “green” cyanide mimic.’

Experts in carbon dioxide chemistry have applauded the new work. ‘This is a fantastically elegant reaction that the Clyburne–Tuononen team has performed, and the isolation, characterisation, and computational study of this molecule reads like a detective story,’ comments Richard Kemp of Sandia National Laboratories and the University of New Mexico in the US. ‘While this particular cyanoformate species is too delicate and unstable to be considered as a possible route into CO2 capture using cyanide, the ground-breaking work presented here indicates that those chemists working in chemical sequestration of CO2 may need to think about alternatives to the highly-electron withdrawing cyanide that were not previously considered possible in order to generate stable oligomers or polymers containing CO2 molecules. ’

Philip Jessop of Queen’s University in Ontario, Canada, says: ‘We know that CO2, a weak Lewis acid, binds to strong Lewis bases like hydroxide, alkoxides, guanidines and carbenes, but can it bind to weaker Lewis bases? Using a weaker base would make the regeneration step less energetically costly. One would have thought that the literature report of CO2 binding to fluoride was probably the limit, but apparently not. In a beautifully simple experiment, Clyburne and co-workers have managed to isolate the cyanoformate anion, in which cyanide is barely managing to bind the CO2.’