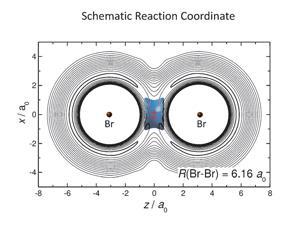 Researchers believe they have confirmed the existence of a new type of chemical bond, first proposed some 30 years ago but never convincingly demonstrated because of the lack of experimental evidence and the relatively poor accuracy of the quantum chemistry methods that prevailed at the time.1 The new work also shows how substituting isotopes can result in fundamental changes in the nature of chemical bonding.

In the early 1980s it was proposed that in certain transition states consisting of a very light atom sandwiched between two heavy ones, the system would be stabilised not by conventional van der Waal’s forces, but by vibrational bonding, with the light atom shuttling between its two neighbours. However, despite several groups searching for such a system none was demonstrated and the hunt fizzled out.

Now, Jörn Manz, of the Free University of Berlin and Shanxi University in China, and colleagues believe they have the theoretical and experimental evidence to demonstrate a stable vibrational bond.

The researchers carried out a series of theoretical experiments looking at the reaction of BrH with Br to create the radical BrHBr, but using different isotopes of hydrogen. By using muons – elementary particles that are similar to an electron but have greater mass – the team added a range of hydrogen isotopes to BrHBr from the relatively hefty muonic helium, 4H, to the extremely light muonium, Mu, with a mass nearly 40 times smaller than 4H.

The team mapped two key parameters: the potential energy surface of the system – the three-dimensional potential energy ‘landscape’ relating the energy of the surface, with hills and valleys – to the geometry; and a quantum mechanical parameter, the vibrational zero point energy or ZPE.

The team used state of the art quantum chemistry to calculate these values and the behaviour of the hydrogen isotopes and showed that for the three heavier isotopes, bonding in the triatomic system was through classical van der Waal’s interactions. However, for the ultralight muonium, a large decrease in vibrational ZPE resulted in stabilisation of the system through vibrational bonding, despite an increase in potential energy.

Furthermore, earlier laboratory experiments by Manz’s co-worker Donald Fleming suggested that the BrMuBr radical can exist, and is not merely a theoretical construct.2

‘In BrMuBr we have shown the first system where there is vibrational bonding,’ says Manz. ‘And also we have an isotope effect on the nature of the chemical bonding in a system.’

Commenting on the work, David Clary at the University of Oxford in the UK says: ‘The study provides rigorous theoretical evidence for vibrational bonding and suggests that isotopic substitution can have a dramatic effect on the ability of molecules to form bound states.’