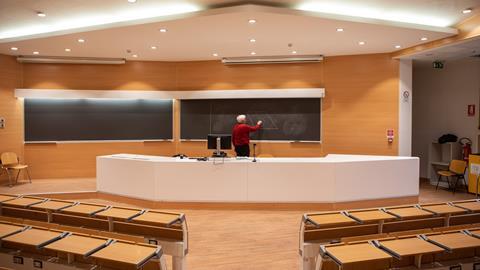 On 8 March, the Italian region of Lombardy announced a state-wide lockdown, mandating that 16 million people stay home to try to contain the spread of Covid-19. The next day, Italy extended the measure to the entire country. Conferences and events have been cancelled or postponed and movement is restricted both within Italy and cross-borders. People have been advised to work from home and only venture out if it’s absolutely necessary.

‘It’s like we’ve been plunged into warlike times 75 years after the war,’ says Nicola Tirelli of the Central Research Laboratories in Genoa, a part of the Italian Institute of Technology. ‘Working, all in all, has become very difficult.’

With 31,506 confirmed cases of Covid-19, Italy is the European country that has been hit hardest, followed by Spain, with 11,178. Spain declared a state-wide lockdown on 16 March, and other European countries are expected to follow suit.

Universities in most European countries are closed or operating in a severely reduced capacity, and most research centres have either been shut down, or employees told to work from home. The UK has announced that universities have started suspending lectures and are expected to close soon.

As a result, universities all around Europe have begun online teaching and postponed the start of the new term. Online teaching is now being offered by the majority of Italian universities. ‘We were not really prepared for that, we are still learning how to do it; the students are happy, so it seems to be working out well,’ Marcello Antonio Budroni, a researcher at the University of Sassari, tells Chemistry World.

‘We are teaching quite normally, having courses online like registered lessons. You can do a pre-recorded presentation, or you can have live sessions with multiple students,’ said Cristiano Zonta, an associate professor of organic chemistry at the University of Padua.

Some universities have only closed campuses to students, while labs remain open to researchers. Faculty coming in to work must respect rules implemented to limit the spread of the disease, such as avoiding direct contact or meetings. ‘Projects are still going on, although it’s not really easy to work as usual,’ Budroni said.

At the University of Padua, most researchers have chosen to work from home reading up on the literature or working on the theoretical parts of their projects. ‘The important point is for the students not to lose the semester, and also for the PhD and postdocs not to waste time,’ Zonta explains.

As for research institutions, Tirelli says that most are still operating but at a reduced capacity. Teams at the Central Research Laboratories in Genoa have taken different approaches to the lockdown, but Tirelli’s team is working in shifts. ‘At most, we have two people per room separated by a distance larger than three metres. So the work has not completely stopped, but has been significantly hampered,’ Tirelli says. The Central Research Laboratories ‘is working at 50% efficiency or less, and it will worsen in a few weeks in case we start having issues with supplies’.

Italy’s Association of Doctoral and Research Doctorates (ADI) is worried about the impact the lockdown will have on the already precarious PhD and postdoc workforce. It’s not clear what may happen to PhD and postdoc students as they are on fixed term contracts. ‘A PhD in Italy is usually three years, so we’re looking to see if there’s a way to compensate for the time lost during the lockdown, or get a deadline extension,’ says Elisa Costanzi, a member of the national board of ADI.

Another issue is the renewal of postdoc contracts, which is usually done on a yearly basis. ‘The longer the universities are closed, the longer you cannot make new contracts, and so postdoc students out of contract could be simply left without work during this period,’ Costanzi said.

Funding for science in Italy is also in limbo for the time being. Calls for grant applications have been postponed for now, and research projects partially or fully funded by companies are likely to be delayed during this time. ‘Basically, everything regarding funding in Italy is frozen,’ Budroni explains.