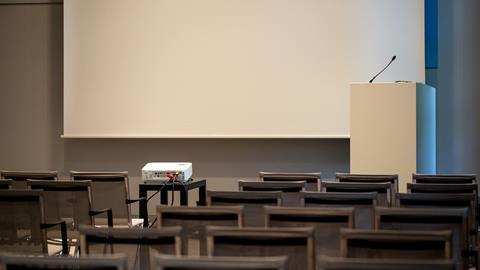 As the number of people infected with coronavirus globally continues to grow, international scientific meetings are grinding to a halt as a result of the pandemic.

The American Chemical Society’s (ACS) national meeting in Philadelphia, US – one of the biggest chemistry gatherings in the world with around 15,000 attendees – has been cancelled after 14 Covid-19 cases were confirmed in Pennsylvania. Although this left many attendees with non-recoverable costs, many chemists expressed relief at the ACS’s decision, which ended several days of uncertainty.

Initially, the ACS said that the event would run but measures would be taken to prevent the spread of the disease that included more hand sanitising stations, additional medical support and a no-handshakes policy. But fears over the spread of the Covid-19 led to a number of chemists withdrawing with many voicing displeasure over the uncertainty surrounding the conference’s fate.

The ACS decided that it had to cancel the meeting on 9 March, 13 days before its scheduled start. ‘Safety is a core value of the American Chemical Society, and as such the health and well-being of our members, community and staff are paramount,’ said executive vice president for membership and society services Kate Fryer.

Earlier this month, the American Physical Society cancelled its national meeting in Denver, US, giving less than 36 hours’ notice. Many of the 10,000 scientists registered had already arrived in Denver when the last-minute notice came through. Some decided to hold informal get-togethers while others moved to virtual meeting platforms. The ACS is also working on providing alternative ways for chemists to share their research.

Other event organisers – notably the Royal Society of Chemistry and the International Union of Pure and Applied Chemistry – have decided to postpone scientific meetings rather than cancel them entirely.

For many event organisers, the situation is a first. The Healthcare Information and Management Systems Society’s meeting, which draws 45,000 participants, was cancelled for the first time in 58 years. It was scheduled to start on 9 March in Orlando, US.

But other conferences and trade shows, most notably Pittcon in Chicago, US, went ahead despite coronavirus fears. Around 12,000 people usually attend the annual scientific instruments show, although the organisers noted a drop in attendance as travel restrictions affected the fifth of participants coming from abroad.

Other conferences, like the 12,000-attendee business software conference SaaStr, have implemented strict contagion-reducing measures such as mandatory handwashing and checks on the temperature of attendees. Whether the latter actually helps to reduce spread of Covid-19, however, is debatable.