The evergreen plants cling onto surfaces using tiny rootlets that spring out from their stems - and they are remarkably hard to prise off. On the microscopic scale, says Mingjun Zhang, of the University of Tennessee, these rootlets end in fingers or disks, hundreds of micrometres long. And as Charles Darwin first reported in 1876 in his monograph Movements and habits of climbing plants: ’the rootlets of the Ivy, placed against glass ...  secrete a little yellowish matter’.

But what this substance is, and how it helps ivy to climb, has remained unclear since Darwin’s time. Zhang and colleagues grew Boston ivy on silicon and mica wafers, and analysed its secretions with atomic force microscopy. They found remarkably uniform particles, 70nm across. ’We are confident that the nanoparticles are formed inside the ivy stem, then secreted out through the rootlet’s fingers,’ Zhang says. 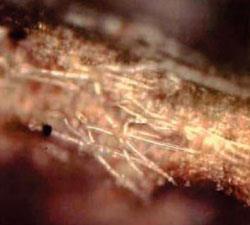 The researchers then checked the composition of the particles with high-performance liquid chromatography/mass spectrometry (HPLC/MS). They picked out 19 organic compounds, which they suggest consist of long hydrocarbon tails and polar nitrogen, oxygen or sulfur-containing heads. ’This suggests that the nanoparticles rely on hydrogen bonding to affix to different surfaces,’ they report.

Heather Viles, a geomorphologist who studies ivy damage to walls at the University of Oxford, UK, comments that the few studies to be done on ivy secretions suggest that they contain polysaccharides. The whitish, dried deposits left behind after ivy is removed from a wall are thought to contain calcium oxalate, she says - though this may be due to a subsequent reaction with calcium carbonate in the rock.

Zhang says his team are now working out the mechanism by which the ivy produces nanoparticles - and he hopes to work out exactly how they help the plant stick to surfaces.