Jingle cells are rocking on sunshine 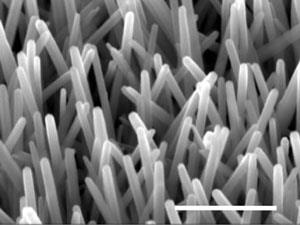 The zinc oxide nanorods can convert rock music into electrical energy, substantially improving the efficiency of the solar cell

UK researchers have shown how solar cell efficiency can be boosted by up to 50% by harnessing acoustic vibrations in the environment, including those caused by roof-top machinery, traffic and even pop music. Although not applicable to existing solar cells, the discovery could improve future photovoltaic (PV) and optoelectronic devices.

Nanostructured hybrid inorganic–organic materials have gained much interest in recent years as an alternative to silicon-based PV cells that can cut costs and boost efficiency. However, a large portion of the light energy is lost due to photogenerated charge carriers undergoing a phenomenon called non-radiative recombination.

Now, Steve Dunn at Queen Mary University of London and James Durrant's lab at Imperial College London have found a way to prevent this loss and, therefore, enhance efficiency by taking advantage of a piezoelectric material's ability to generate electrical energy from acoustic vibrations.

The team created devices by incorporating zinc oxide nanorods, which have piezoelectric properties, with an organic poly(3-hexylthiophene) (P3HT) PV cell. Under illumination, they then applied acoustic vibrations by playing single frequency signals through a loudspeaker at 75dB and between 1–50kHz, analogous to ambient sounds, and observed an enhancement in device performance of up to 50%.

'The devices we tested were 1.2% efficient without sound and went to just over 1.8% efficient with the sound,' says Dunn. They also tested different types of music including rock, pop and classical on device performance. 'Basically rock and pop music work best, as there is a larger spread of frequencies in the music.'

Although piezoelectric materials have been combined with photovoltaic cells in the past, previous enhancements of performance were fractions of a percent and were due to small piezoelectric voltage outputs adding to the photovoltage generated by the solar cell. 'Our report is the first to show a substantial increase in performance, not by adding two different voltages together, but through using the internal motion of the carriers to reduce the recombination and therefore enhance performance of the PV significantly,' explains Dunn. 'I suspect this kind of process will have some niche applications, certainly anywhere where there are loud or high levels of vibrations.'

Experiments suggest that the improved performance is down to the zinc oxide nanorods converting the kinetic energy of the vibrations into electrical energy. This electric energy interacts with the excited charge carriers formed by sunlight in the PV polymer, and this interaction prolongs their lifetime and reduces the rate at which they are lost to recombination.

'From the perspective of a practical application there would have to be more work done on how it could be implemented as you’re needing to bring both sunlight and sound together at the same time,' comments Rob Dorey, who investigates piezoelectric nanomaterials at Cranfield University, UK. 'But I think the paper proposes an interesting hypothesis on how the piezoelectric effect can help in PV generation and a 50% improvement is quite significant. I particularly like the concept that pop music is more effective than classical music – at last an environmentally sound excuse to turn the music up.'