Keep on the grass

US researchers have found it is possible to grow crops for fuel in a way that results in a net reduction of CO2 in the atmosphere. Most biofuel systems are carbon neutral - the amount of CO2 emitted when energy is released from the crop is balanced by the uptake of CO2 during the crop’s growth. The latest work shows that when native grasses are grown for fuel on poor soils, the overall impact is carbon-negative - more carbon is locked away into the soil than is released when the grasses are harvested, processed and used for fuel. The carbon remains sequestered, the researchers say, for more than a century. 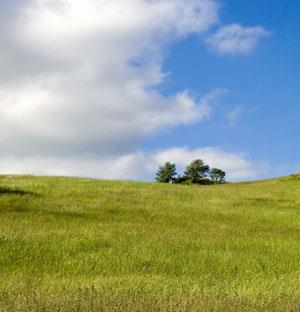 David Tilman and colleagues at the University of Minnesota planted various mixtures of native grasses on poor soil to find out how much energy could be derived from the plants as biofuel and how much CO2 was taken out of the atmosphere. Over a period of a decade the researchers showed that a mixture of grasses produced more energy per unit area of land, less pollution and more greenhouse gas reduction than corn grain ethanol or soybean diesel.

One of the main attractions of the system is that the grasses can grow on degraded land that would otherwise be useless for growing food crops. A big worry about biofuels is that they usually require fertile soil, competing with food production. Furthermore, the grasses require little in the way of fertiliser, herbicide or irrigation, thereby reducing energy costs and pollution.

Even after the grass has been burned as an energy source or otherwise processed to release energy, there is a net reduction in CO2 emissions from the fuel. As they grow, the grasses sequester CO2 in their roots, which remain resistant to degradation for many decades.

’When prairie plants grow, about half to two-thirds of the carbon that they fix goes into the roots, which are tough, recalcitrant and resistant to digestion by bacteria or fungi,’ Tilman told Chemistry World. ’It takes between one and two centuries to break down this matter and release the carbon back into the atmosphere.’ According to his team’s findings, this locks up more than four tonnes of CO2 annually per hectare of land.

Iain Donnison of the Institute of Grassland and Environmental Research in the UK said that the development of energy crops that grow on marginal land not required for food production was important. ’Such crops must be sustainable and not require high levels of energy-intensive inputs such as cultivation, fertilisers and pesticides,’ he said. ’The advantages of such an approach are maintenance of current agricultural practices, particularly in environmentally sensitive areas such as national parks where the visible landscape is important.’