Chemists from Germany and Spain have developed a way of preventing metal-organic frameworks (MOFs) - hugely porous materials with enormous potential for storing a range of molecules and other structures - from ’clogging up’ during synthesis. The technique also allows for much larger pores to be created than has been possible so far, further extending potential applications for these materials.

Metal-organic frameworks consist of hollow lattices made from organic linkers attached to inorganic coupling units. These molecular cages are highly porous and have been pursued vigorously as a way of storing everything from hydrogen to small metal clusters for use in catalysis.

One major problem, however, is the phenomenon of ’interpenetration’: as the size of the pores is increased by extending the length of the linkers, new sub-lattices are synthesised within the existing frameworks. The cages essentially become enmeshed, reducing the effective size of the pores.

Now a team led by Christof W?ll of Ruhr University Bochum in Germany believes it might have cracked the problem. Traditionally, MOFs are made by reacting the linkers and coupling units together in a solvent at high temperatures. W?ll’s team, however, has used an approach based on surface chemistry to lay down the individual components sequentially onto a geometrically precise template, consisting of an organic self-assembling monolayer. Because of the highly ordered nature of the surface, the newly assembled frameworks can align in only one plane. In turn, the growth of subsequent layers of frameworks is also constrained to a specific position on the underlying layer, regardless of the size of the pore, preventing interpenetration. 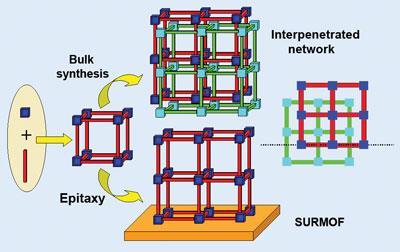 Using conventional synthesis, two equivalent networks (red and green) are often formed at the same time. Using this new method, the equivalence of these two networks is lifted by the presence of the substrate (dotted line in the schematic diagram on the right) and the formation of interpenetrated networks is suppressed, yielding SURMOFs containing only one network.

’We believe we have a strategy to control interpenetration and to build MOFs with very large pores,’ says W?ll. ’In principle it should be possible to make frameworks that could hold something as large as a protein.’

Neil Champness, an expert on MOFs at the University of Nottingham in the UK, says that the issue of interpenetration has dogged MOFs since their discovery some 15 years ago, and that the new work ’brings forward the possibility of commercial applications for certain systems.’ Champness adds, ’This is of significance for the general field and it will make people sit up.’

’This might prove to be a general method with which to control and evaluate the effects of interpenetration,’ says  Stuart James, who researches MOFs at Queen’s University Belfast in the UK. ’The stepwise layer-by-layer build-up also presents attractive new opportunities such as making materials containing different types of layer, potentially segregating chiral, sieving or catalytic regions for example.’