Kiss of death for cancer cells

Scientists have deciphered the surprising structure of the perforin pore, which delivers lethal enzymes that kill cancer cells in the body

Scientists have deciphered the surprising structure of the perforin pore, which delivers the ’kiss of death’ to virus-infected cells and cancer cells in the body. 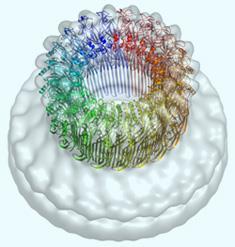 When the immune system has identified a target cell in the bloodstream that is either cancerous or virus-infected, it activates killer cells which execute it by lethal injection.

Upon close contact with the target, the killer cells release the protein perforin into a narrow space between the cells, which will then punch holes in the membrane of the target cell, through which destructive enzymes enter the cell. Now, researchers in Australia and the UK have elucidated the structure of perforin both in the water-soluble state and in the membrane pore.

’The first major step in understanding perforin came from the discovery that it is related to a family of bacterial toxins, including pneumolysin, which we had previously studied,’ reminisces researcher Helen Saibil of Birkbeck College London, UK. ’We went on to obtain an electron microscopy map of perforin pores, and we could see some similarities to pneumolysin pores but we couldn’t interpret the structure in detail.’

Each pore is made up of 19-24 molecules of the protein, creating an entrance between 130 and 200 Angstroms in width. The variable composition of the pore rules out structure analysis by crystallography, while its size makes it unsuitable for NMR.

The breakthrough came when the Australian researchers at Monash University in Australia determined the structure of the form the molecule adopts in solution, before it inserts into the membrane, applying x-ray crystallography to a mutant version that lacks the ability to associate into pores.

When they tried to match up the crystal structure to the less detailed images of the pore obtained by electron microscopy, the researchers were in for a surprise. ’We were initially puzzled to find that the molecule seemed to fit into our pore structure in an inside-out orientation compared to pneumolysin pores,’ Saibil says. However, labelling experiments confirmed that mammalian cells use the pore ’the wrong way round’ compared to the bacterial system.

’Remarkably, the same basic pore forming machine, used both by the immune system for defence and by bacteria for attack, works in opposite orientations in these two systems,’ Saibil concludes.

’This is a wonderful extension of the breakthrough work of 2007,’ says Hagan Bayley of the University of Oxford, UK, referring to the discovery of the similarity between perforin and bacterial pores. ’The weapons used by our immune cells and by pathogenic bacteria have a common origin, but now it seems they swing their swords in different ways.’