Is the problem of highly radioactive nuclear waste on the verge of being solved? This is the tantalising prospect raised by the discovery of a new organic ligand that can selectively extract the extremely radioactive components of spent fuel, allowing them to be fed back into the nuclear plant to create energy and in the process become non-radioactive. These components of spent fuel - the minor actinides - cannot currently be separated from contaminating lanthanides, which prevents them from being re-used. The actinides are highly radioactive and need to be safely stored for thousands of years. If these could be removed, much smaller levels of high level waste would accrue and would remain hazardous for a much shorter period of time - between one and two hundred years - rather than effectively forever.

In a typical nuclear reactor cycle, around 500kg of uranium is fed into the system, producing about 850g of high level waste. This is made up of minor actinides including neptunium, americium and curium. ’These are unbelievably radiotoxic, and need to be stored in metres of concrete,’ says Laurence Harwood of the University of Reading in the UK, who led the ligand research.

In the next decade or so, a new generation of nuclear reactors will start to come on stream that will be able to use these minor actinides as fuel, converting them into non-radioactive products. The new reactors rely on high neutron flux, bombarding the fissile material with an intense stream of neutrons. A high degree of control is needed over the neutron flux to ensure that the reaction proceeds at the appropriate speed. Lanthanides, however, are efficient neutron absorbers so any lanthanide present in the mixture will interfere with the process. 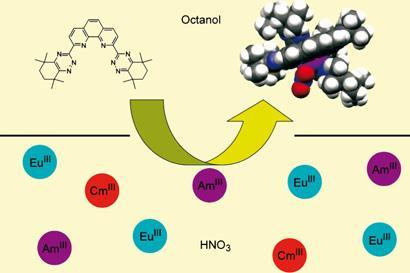 The team, which includes researchers from Belgium, France and Germany, modified an earlier ligand and achieved hugely improved selection. The original ligand was based on a backbone of four nitrogen-containing aromatic rings. This showed good selectivity, but was prone to attack by radioactively-generated radicals.

The effect of these modifications was startling. A separation ratio of around 20 to 1 - that is 20-fold more actinides removed by the ligand than lanthanides - is considered good. The new ligand, 2,9-bis(1,2,4-triazin-3-yl)-1,10-phenanthroline, achieved a separation ratio ranging between 68 and 400 to 1.

Its precise mechanism of action is unclear. ’It seems that two ligands lock onto the target cation, forming a cavity that wraps around the target,’ says Harwood. ’It appears that this cavity is exquisitely set to selectively bind actinides over lanthanides.’

The ligand meets all the major criteria required of it Harwood says. Its synthesis can be scaled up to the level of tonnes, it is relatively inexpensive to manufacture, it is resistant to acid hydrolysis and radiolysis and has appropriate kinetics for selective extraction and stripping of actinides.

Polly Arnold, an expert in lanthanide and actinide chemistry at the University of Edinburgh, UK, says, ’It’s   a very beautiful result and one which is impressive in its ability to sort out subtle differences between these metal cations which people always lump into the same bag and cast them off as being impossible to separate.’