Light harvesting with many man-made leaves 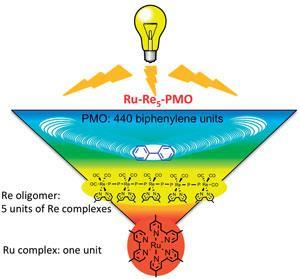 Photons absorbed by Bpâ€“PMO framework are first concentrated to the rhenium oligomers, and then to the ruthenium reaction centre

Previously, researchers had only used one-step light harvesting systems, greatly limiting the number of absorbers able to feed light into a single reaction centre. Now, by imitating photosynthetic systems, Osamu Ishitani at the Tokyo Institute of Technology, Shinji Inagaki at the Toyota Central R&D labs and their co-workers have efficiently harvested light using the highest number of artificial leaves to date.

‘Photon collection has always been a problem in developing efficient solar energy conversion systems because the molecules are so small and solar light is so dilute,’ says Ishitani. ‘This new system is fantastic because now we can accumulate light from a large area and into, say, a photocatalyst.’

Other researchers are enthusiastic about the work. ‘The bio-inspired design of their synthetic assembly is certainly intriguing, because it mimics some important features of photosynthetic light harvesting systems,’ comments Erwin Reisner, an expert in solar fuel generation at the University of Cambridge in the UK.

Steve Dunn, who investigates energy harvesting materials at Queen Mary, University of London, UK, regards the system as ‘genuinely transformational’. ‘While it might prove difficult to manufacture real world devices or applications with this latest breakthrough, there is no doubt that this development is significant and exciting.’

Ishitani and his team plan to merge their light harvesting technique with their work on photocatalysts for CO2 reduction, and hope to eventually apply this future system to water oxidation photocatalysis. He emphasises the long road ahead and says many more breakthroughs are needed before we can use such artificial photosynthesis in daily life, but that developing these systems is crucial for humanity.