Energy transfer plays a central role in our world and now scientists in Japan have actually captured an image of this process as it occurs between two molecules.

One of the most striking examples of energy conversion in the natural world is photosynthesis – a process which many scientists have tried to ape in a bid to split water and create solar fuels. But getting to grips with molecular energy dynamics to improve such technologies is difficult, according to Yousoo Kim from Riken. ‘So far, the excitation dynamics have been investigated mainly by optical spectroscopy,’ he explains. ‘However, the spatial resolution of conventional optical spectroscopy is limited to a few hundred nanometres, and a large part of such processes on the nanoscale is still unknown.’ 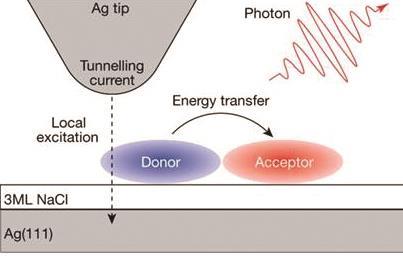 A tunneling current was used to excite a donor molecule. The subsequent energy transfer forces an acceptor molecule to luminesce

To get around this problem, the team focused their attention on a different form of microscopy – they used a scanning tunnelling microscope (STM). An STM can pinpoint the exact position of an atom on a surface by probing the electric current that flows between the probe tip and surface. Since Don Eigler and Erhard Schweizer first used a STM to spell out the IBM logo with xenon atoms, researchers have been finding new ways to exploit these electric currents.

Kim and his colleagues have now used it to induce energy transfer across two molecules. The team first deposited individual molecules of magnesium phthalocyanine and free-base phthalocyanine onto a NaCl-layered silver surface.

Using Eigler and Schweizer’s approach, the phthalocyanine molecules can be moved towards each other. Once in place, the team apply a voltage and use the current to excite the magnesium phthalocyanine molecule. This ‘donor’ molecule fluoresces and some of the energy is absorbed by the neighbouring acceptor molecule, which in turn emits a photon. 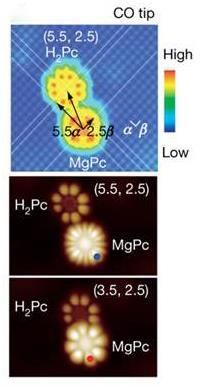 Known as scanning tunnelling luminescence, the team can view the energy transfer taking place optically. Kim’s group also found this energy transfer depended on the distance between the molecules, and, in some cases, can also swing both ways.

Putting such changes under the microscope may allow researchers to gain unprecedented control over energy, according to Kim. ‘Profound insights into energy transfers based on nanoscopic experiment not only deepen our understanding of how energy is converted at the nanoscale level, but also pave a path to controlling the movement of excitation energy at the molecular level,’ he says.

‘I think that the application of STM with photoluminescence detection provides an opportunity for a revolution in the field of energy transfer,’ says Gregory Scholes, an expert in energy transfer mechanisms from Princeton University, US, who won the Royal Society of Chemistry’s Bourke Award in 2012. ‘The next directions will be to work out if the fields due to the metal substrate layer or the gold STM tip play a role in increasing or tuning energy transfer rates.’