Researchers have developed a new molecular system that could be used as the basis for a battery that can be recharged by light. In the system, light generates charge which is then stored until it is needed. In an ordinary photovoltaic cell, the charge must be used immediately or it rapidly becomes neutralised.

The team, led by Ifor Samuel at the University of St Andrews in the UK, synthesised tree-like organic semiconducting dendrimer molecules with a cationic cyanine-based core associated with an iodide anion. The organic semiconductor and iodide are blended together into a layer between two contacts. 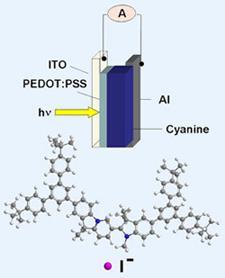 Upon exposure to light, the cyanine core absorbs light, forming an excited state that is initially neutral - an exciton. Charge separation then occurs as a result of an electron being transferred from the anion. The researchers suggest that charge can be stored because the charged state of the cyanine results in a stable conformational isomer. Upon completion of a circuit, the charge moves to the contacts and the system discharges.

’For test purposes we did ten charge and discharge cycles and saw little degradation,’ says Samuel. ’So we expect it, like a battery, to be able to sustain far more.’

Samuel says that the amounts of stored power are, as yet, small. ’So far it is an exciting proof of principle. However, most technologies start like that and it is reasonable to expect large improvements with further work.’

Samuel says that a photo-rechargeable battery system would be useful because while solar power is abundant, it is not always available - for example at night. ’There is a real need to generate power and then store it. The interest of our device is that it combines both functions. That makes it more compact, easier to make and easier to integrate into electronic devices such as calculators.’

Hiroyuki Nishide, an electronic materials expert from Waseda University in Japan, says, ’Although the energy and power densities need to be increased, this new idea of a battery configuration could be one of the special features to stimulate further studies on organic materials for energy-related applications.’