Limestone batteries could be the key to transporting energy across huge distances, according to chemists in Germany. The idea, which would be used to take solar energy harnessed in the African desert to cities in Europe, might be more efficient than power lines, and could even sequester carbon dioxide emitted by fossil fuel plants.

Researchers exploring greener ways to generate electricity have often looked to the deserts, where enough sunlight falls in six hours to power the world for an entire year. DESERTEC, developed by European scientists, economists and politicians, offers one way to tap this resource. In this concept, power plants would be located in northern Africa that concentrate the sun’s rays onto oil, which would boil water into steam to drive turbines. The electricity generated by these turbines would then be transported thousands of kilometres to cities in Europe via high-voltage, direct-current (HVDC) power lines.

HVDC lines can be more efficient than normal alternating-current lines, because they operate at less current and, therefore, suffer less resistance. But over 3000km, HVDC lines are still expected to lose 10 per cent of their power, dragging down the overall efficiency of the DESERTEC concept from 12 per cent to 10.8 per cent.

Now, Benjamin M?ller and colleagues at the University of Erlangen, under the auspices of the Energy Campus Nuremberg research platform, have come up with an idea that could ameliorate this loss, and at the same time cut some of the CO2 produced by fossil fuel plants. Rather than generate electricity at the African solar concentrators, says M?ller’s group, engineers should direct the sunlight to reactors filled with limestone (CaCO3). At around 1000?C, the limestone would convert to quicklime (CaO) and CO2, which could be converted using other solar energy and hydrogen into useful fuel such as methane. Meanwhile, the lime could be transported over land and sea to European cities where, upon heating to 650?C in the presence of CO2 from local fossil fuel plants, it would reconvert to limestone with a massive release of heat. This heat would then boil water into steam to drive turbines, generating electricity on-site. 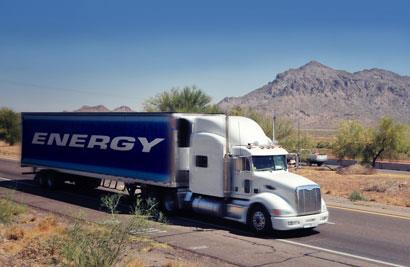 The Erlangen researchers estimate that, overall, their method would keep the DESERTEC efficiency at 12 per cent. What’s more, they calculate that the extra CO2 sucked up at fossil fuel plants could reduce the total CO2 output of Germany alone by up to 50 per cent.

’The idea is sound, intriguing and is worthy of detailed investigation [because] it challenges existing thinking,’ says Magdi Ragheb, an engineer at the University of Illinois at Urbana-Champaign, US, who has studied the DESERTEC concept. However, Ragheb points out potential problems, such as the transport of solids. ’Liquids such as petroleum are easy to handle as they can be pumped; solids are more difficult to handle,’ he adds.

Other environmental experts agree that the idea may suffer practical hurdles. ’It was the first time I had seen this idea, so from that perspective it’s intriguing,’ says Sally Benson, an expert in carbon dioxide sequestration at Stanford University in California, US. ’[But] you’ve got all this solid you need to react very quickly...you’d need to have it very finely ground, so now all the material handling becomes a big issue.’

M?ller’s group itself points out another practical drawback - that, over time, the limestone’s crystal structure would change, so engineers wouldn’t be able to convert 100 per cent of it to lime. ’Artificially synthesised materials [would instead be] the best option to achieve a high degree of conversion,’ says M?ller. ’But addressing this problem is a big issue in research at the moment.’ However, he adds that his group is exploring other candidates besides limestone for chemical storage.

’The [idea] sounds interesting,’ says Michael Straub, a spokesperson for the DESERTEC Foundation. ’But as we have just a few years left to slow down global warming, we are actually focusing on technologies that are available today. As the worldwide implementation of DESERTEC will take decades, this technology might be an option for future [solar concentrator] plants.’