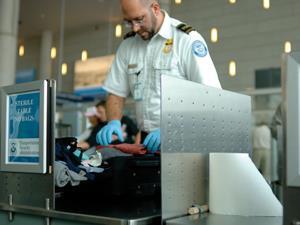 An end to carrying a plastic bag filled with tiny bottles of shampoo, toothpaste and other liquids through airport security could be in sight, thanks to new analytical equipment being rolled out around the world.

The threat of liquid explosives being used to bring down an aeroplane first emerged in 2006, when terrorists plotted to blow up planes using hydrogen peroxide-based, rather than more conventional nitrogen-based, explosives.

Since then several companies have been developing ways to detect liquid explosives in hand luggage, particularly peroxide-based liquids, within sealed bottles or other containers. Some use sniffer technology but this depends on a residue on the outside of a container. Most therefore use technology based on Raman spectroscopy where scattered electromagnetic radiation from objects is collected to determine molecular composition. Manufacturers of liquid explosive detectors tend to concentrate on either x-rays or wavelengths closer to the spectrum of visible light.

UK-based Cobalt Light Systems has developed a refinement of the latter approach, which recently won them a place as a finalist of the MacRobert Award of the Royal Academy of Engineering. ‘The surface and contents of a bottle have two distinct Raman signatures,’ explains Ken Mann of Cobalt Light systems. ‘A single laser, as used in several other devices, will only provide a composite of the two signals and in many cases the signal from the container swamps that of the contents. At Cobalt we use a technique known as SORS [spatially offset Raman spectroscopy] to collect Raman signatures separately from both the container and its contents.’ Software can then be used to subtract the container’s signal from that of the contents giving the operator a unique Raman signature of the liquid inside the bottle.

Previous uses of Raman spectroscopy have been limited by the composition of the bottle. If it is plastic its signature will swamp that of the container’s contents or if it is glass it will fluoresce. Cobalt’s system gets around both limitations, making it a very powerful technique.

The SORS technology was invented by Pavel Matousek of the UK’s Rutherford Appleton laboratory, who then set up Cobalt as a spinout. Development costs were paid for by the UK Home Office and other government departments, as well as by the US government. Since then the technology has gone from strength to strength, says Mann, and 400 of the devices have now been deployed in 65 airports worldwide – including eight of the largest airports in Europe. The advantage of the Cobalt system is that it is fast and easy to use.

At the moment a limitation of the technique is that it cannot see through metal containers and Ken Mann tells me that this is the company’s focus at the moment. A consequence of this is that other systems still need to be used in tandem with Cobalt’s.

One such system is UK-based Kromek’s cadmium telluride x-ray Raman system. Company director Arnab Basu explains: ‘To go through a substantial volume of liquid and materials you have to have fairly high energy x-rays. It has been known for the past 30 years that cadmium telluride is one of the most efficient detectors.’ This means that, like Cobalt’s detector, Kromek’s technology can resolve the containers signals from that of the contents, albeit using a different approach.